It’s almost here. No, not real life pocket-sized lightsabers. Those are still a ways off. The NBA trade deadline. That’s what almost here. Thursday at 3 p.m. ET , the deadline will come to pass, at which point, the Association’s power structure could experience a seismic shift, inciting disorder into an already-crazed season. Or, more [...]

Happy (almost) NBA All-Star Weekend everyone. Something is in the air, and it’s not love. Well, maybe a little bit of love. Valentine’s Day is just around the corner, after all. Most of what you’re sensing, though, is more chaos. Although the top-most teams remain relatively consistent in their performance, the mediocre and bottom-feeding outfits [...]

This one’s all about you. No, not you, Steven Tyler, lead singer of Aerosmith. I know you’re reading, but this isn’t about just you. It’s about all of you, the fans. Imagine the worst version of yourself; the absolute most-insufferable supporter of your favorite NBA team. Then times it by 10. Or more. That’s what [...]

Happy hump week! That’s right, hump week, the time of year in January when the NBA has eclipsed the halfway point and is fast approaching meaningful basketball. Not that all previous games have been worthless. For anyone who isn’t a fans of the Bucks, they haven’t. But now they have more purpose. With more than half [...]

Judgment day has arrived. Kind of. Halfway through the 2013-14 NBA season, most of us feel like geniuses. We know stuff now, you see. Real stuff. Important stuff. Which teams will make the playoffs for sure? We know that. Which teams are absolutely terrible? We know that, too. Why exactly is the Eastern Conference reaching [...]

That stench wafting through your home and into your oversized nostrils is coming from the NBA. Although it’s difficult to pinpoint what it actually is, we’re above confusion: it’s clarity. We’ve reached that point of the year where the Association’s happenings finally make more sense than whatever outfit Robin Thicke is wearing these days. Injuries and [...]

We’re back. After a brief—okay, not so brief—holiday hiatus, your favorite version of NBA Power Rankings written by a left-handed someone named Dan with an affinity for em dashes is back. Try to curb your enthusiasm, as I only packed enough adult diapers for myself. Anyway, a lot has happened since we’ve been gone. Russell [...]

Addition by subtraction. Depletion by addition. That’s been the NBA’s prevailing theme this season. So many teams aren’t where they’re supposed to be. And I mean so many. Can anyone explain the Phoenix Suns, lottery-dwellers of 2012-13? Though they added Eric Bledsoe, they traded away Marcin Gortat and Jared Dudley. Now they’re among the Western [...] 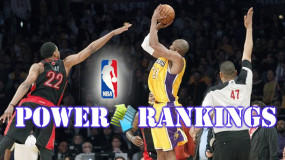 He’s back. Kobe Bryant has officially returned for the Los Angeles Lakers, blowing our weekly NBA power rankings straight to hell…is what I would’ve written if that actually happened. The Black Mamba is indeed back, but hasn’t done anything to shift our standings. If anything, he hurt the Lakers by not rising up out of [...]

We meet again. One of these times, it won’t be under such dire circumstances. I’ll come to you, wrapped in multi-colored robes and fluorescent glitter, talking about health, durability and how uncommon fragility has become. There will be no mention of a Derrick Rose injury. Or Marc Gasol catastrophe. Or Anthony Davis fracture. Or Paul [...]