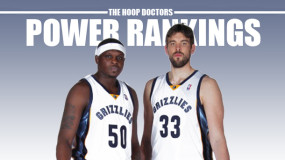 Allow me to tell you a secret. Injuries suck. The NBA has been a hotbed for injuries and sad storylines early on, and it sucks and blows simultaneously. So, too, does the whole early-season confusion. There is so much inconsistency around the Association this time of year. Good teams aren’t good, bad teams aren’t bad, [...]

NBA Power Rankings: The Regular Season is Here…Let’s Get Weird 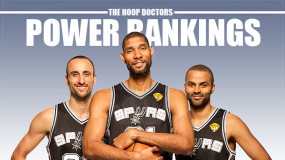 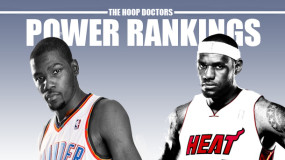 Folks, you made it. Congratulations. The NBA regular season is over. It’s done. Finished. Finito. And good riddance. Don’t get me wrong, this season was crazy. Downright exciting. But it also sucked. It sucked so freaking hard. More than it’s sucked in the past few years. Did it rival the 2011-12 lockout-truncated season? Shit, I [...]

The NBA playoffs are almost here. Someone please explain that to most of the Eastern Conference teams please. Even those atop the standings are struggling, playing like this isn’t the most important time of the year. In the Western Conference, you have four elite teams duking it out for the final three postseason slots. Really, [...]

Things are getting tense in the NBA. Months of playing and winning and losing and tanking and contending and injuries and comebacks and other stuff have come down to this: two-plus weeks of season-defining basketball. Some teams are battling for postseason seeding. Others are fighting for playoff survival, looking to snag a last-minute berth. A [...]

Put your trust in this week’s edition of NBA Power Rankings. With the regular season drawing to a  close, it’s really time to start putting things in perspective. Quite randomly, I stumbled upon the idea to develop an unpolished trust meter for every team, good and bad, tanker and contender, the Philadelphia 76ers and San [...]

NBA Power Rankings: Wrath of the Spurs, Pain of the Thunder

March Madness, here the NBA comes. While many of you remain transfixed on your television screens, waiting to see how long it takes before Wichita State gets screwed by vengeful and begrudging bracketing practices, some of us still care about the NBA. And its playoff race. And whether or not LeBron James can win another [...]

NBA Power Rankings: Oh How the Mighty Have Fallen

Three cheers, eight fist-pumps and infinite twerks for movement. The NBA is rife with movement this week. Goliaths fell, Davids ascended and the enfeebled experienced success. Translation: It’s been weird in the NBA lately. (Spoiler alert.) (Seriously.) (Don’t read what comes next if you don’t want to ruin the below contents.) (I’m not joking.) (Okay, [...]

NBA Power Rankings: The West Is Good, The East Is Not

The NBA’s Eastern Conference is good, man. Just kidding. It’s awful. All kinds of awful. The most awfullest thing ever. Picture the worst meal you’ve ever ate. Then envision yourself eating said meal alongside your most insufferable ex. And then imagine what it would feel like if that meal and rendezvous took place in the [...]

Welcome to the rest of  the NBA season. With the All-Star break in our rear-view mirror, things are starting to get serious. They’re heating up. The Heat are heating up. Playoff berths and positions are on the line as the Association prepares for the latter quarter of its campaign. And so is lottery order, which [...]