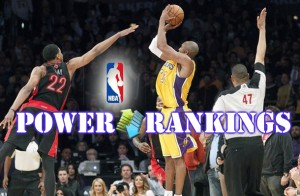 Kobe Bryant has officially returned for the Los Angeles Lakers, blowing our weekly NBA power rankings straight to hell…is what I would’ve written if that actually happened.

The Black Mamba is indeed back, but hasn’t done anything to shift our standings. If anything, he hurt the Lakers by not rising up out of center court, sporting a cape and combat boots, ready for battle, when he returned. All we got was some Darth Vader music—which was still pretty awesome.

Other things happened, too. The Indiana Pacers are starting to make me believe, though not quite. The San Antonio Spurs continue to be amazing. So, boring. And when the Portland Trail Blazers aren’t requesting a move to the Eastern Conference, they’re making us scratch our heads by being so damn incredible.

Elsewhere, tankers continue to tank. Some of them accidentally (how you, Milwaukee?). Rudy Gay has joined a puzzling dance party in Sacramento, while the Toronto Raptors are now fit to plummet down the standings of an already horrific Eastern Conference. We think. Potential addition by subtraction comes into play here.

Rounding out our pre-ranking observations are the New York Knicks and Brooklyn Nets, both of whom still suck something awful and have the two-highest payrolls in the NBA. And you thought the dollar wasn’t what it used to be.

Join The Hoop Doctors as we try to make sense of a league that has been wonderfully/maddeningly unpredictable, more so than usual.