Paul Pierce Fine With Coming Off Bench For Brooklyn

Anou Enright December 11, 2013 Rumors No Comments on Paul Pierce Fine With Coming Off Bench For Brooklyn 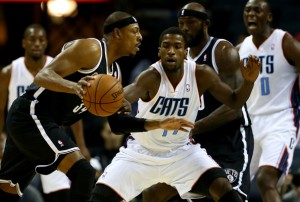 Coming off the bench is the fate of many star-players-turned-veterans at some point, but not everyone takes that realization the same way. The Nets’ Paul Pierce seems to be just fine with it though. Pierce is battlign his way back from a hand injury and said he is fine with coming off the bench.

Paul’s game has never been based on speed or quickness, so he hasn’t really lost a whole lot in that reard. Nevertheless, it shows maturiy on his part:

“I liked him being a leader with that second group,” Kidd said. “Will it stay that way? I don’t know. We will look at the video tomorrow as a team and coaches. I will talk to Paul and see what his comfort level is, but I would like to get him back, give him more minutes and get him used to that glove.”

It was just the fourth time in his 16-year career — almost exclusively with the Celtics — that Pierce came off the bench. Alan Anderson started in his place, scoring 15 points in 35 minutes.

“It’s all about winning,” Pierce said. “If that’s what’s best for the team, then so be it.”