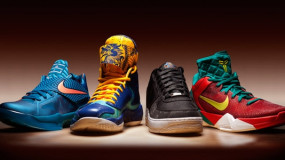 January 7, 2012 – Ben Berry ” Now on their 11th straight year of honoring the Chinese New Year, Nike takes four of their biggest basketball models and gives them the Zodiac treatment. Nike Air Force One – ‘Year of the Dragon’ The Air Force One was made back in 1982, so 2012 marks the [...] 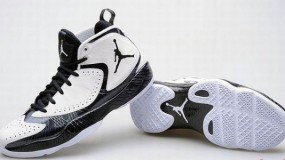 January 5, 2012 – Ben Berry New year, new model in the Air Jordan series. This time around the first incarnation of the Jordan 2012 series comes already constructed from Flywire. The design seen on the toecap of the Jordan 2K12 reminds of the styling seen on wingtip shoes, maybe to giving a nod to [...] 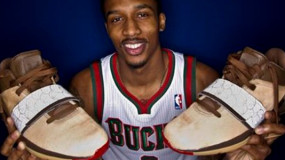 December 14, 2011 – Ben Berry With the NBA still under a league lockout, basketball sneaker companies took advantage of the freedom to come up with colorways without the restriction of team colors. How does the ‘Bango’ Micro G Bloodline weigh against the other rare UA Bloodline SMUs? Let us know in the comments below. [...]