Are the Cavs Vulnerable in the Improved Eastern Conference?

Anou Enright March 28, 2016 Blogs, Ryan Bawek No Comments on Are the Cavs Vulnerable in the Improved Eastern Conference? 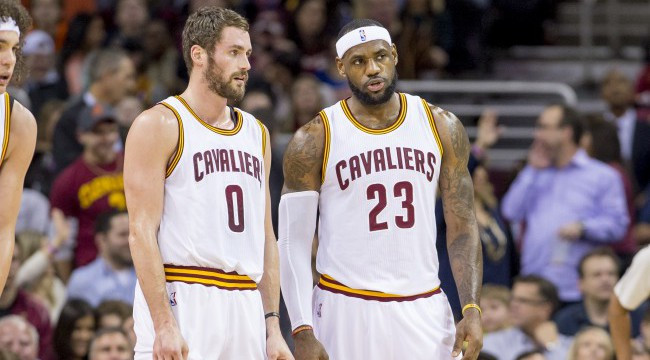 The Cavaliers are always going to be the subject of much scrutiny whether legitimate or manufactured as long as LeBron James is in town.

With a dominating win over an upper echelon team like Oklahoma City, chatter is that the big three in Cleveland is finally gelling and could be a serious championship contender. But with a bad loss to the likes of the Brooklyn Nets chatter is that the team has no chemistry and needs to be broken up immediately.

If LeBron chooses to unfollow the team Instagram account or works out with Dwayne Wade in Miami he is gearing up to abandon “The Land” again.

While I think somewhere between 10-20% of the conspiracy theories or chemistry issues have any real validity, it is still fair to question whether Cleveland has as much of a stranglehold over the Eastern Conference as some may assume.

Have the Cavs Been Better Under Lue?

In 33 games since the Cavaliers fired David Blatt and promoted Tyronn Lue to head coach on January 24, the Cavs have gone 22-11. This is a slight decrease in winning percentage at 66.6% compared to the 71.4% winning percentage they had in their first 42 games under Blatt in which they were 30-12.

Here is a breakdown of how their performance has been different by quarter under Blatt and Lue, according to NBA.com writer John Schuhmann.

The Cavs are clearly better out of the gate under Lue but have struggled to close out games as well as they did under Blatt.

They seem to be happier under Lue which may be enough to validate the move, but it looks as though Lue’s much lower level of experience coaching compared to Blatt may be affecting their ability to execute in crunch time which could prove to be an issue when things heat up in April.

Where do they rank in important statistical categories?

Defensively the Cavs are third in the league in points given up per game at only 97.9 per game. They are also top 10 in opponent rebounds.

Interestingly enough, they are middle of the pack in most other defensive metrics, which seems odd considering they are ranked 3rd in defensive scoring. When you dive deeper though, you see that the Cavaliers play the second slowest pace in the NBA with 95 possessions per 48 minute game on average. This allows for the Cavs to give up under 100 point per game. It has never made sense to me that the Cavs play so slow with a fastbreak freight train in LeBron, a high octane scoring point guard in Kyrie Irving and one of the best outlet passers in the NBA in Kevin Love, but that is their preferred style.

Overall they are 4th in offensive rating in the NBA and 8th in defensive rating which seems to make them championship caliber in normal years.

How have they fared against the elite in the league and eastern conference?

They are 6-5 against teams with an above 60% winning percentage this season which are the Warriors, Spurs, Thunder, Raptors and Clippers. They dominated the Thunder and Clippers, split with the Spurs, got swept by the Warriors and are 1-2 against the Raptors.

They are currently 11-8 against the other seven teams currently slated to make the postseason out of the Eastern Conference and in particular have had some struggles against the Pistons, who they may face in round 1.

The Raptors conversely are 15-6 against the other current playoff teams in the East.

These numbers don’t really give a definitive answer which is in itself somewhat revealing as to how the gap between the Cavs and the rest of the east is much more minuscule than people think.

How is LeBron holding up?

LeBron James was clearly dealing with some knee pain among other things last season which caused him to take a mid-season “break” in order to rejuvenate himself after a poor start. Much like last year LeBron’s numbers have trended up the past month as his scoring, rebounds, assists and field goal percentage are all up in March and he looks pretty frisky with all of this highlight dunks on a nightly basis. He has been quoted saying that he has been taking better and smarter care of his body this season and looks primed to have another strong postseason in him. Whether Kyrie Irving can get back to the level he was playing at last year is the bigger question.

Is the Chemistry There?

This is always a concern in the media and although there have been reports of Kyrie Irving’s supposed desire to play elsewhere to be “the guy”, Kevin Love’s general unhappiness with his usage levels, and LeBron’s pension for public and cryptic call-outs of teammates through twitter, things seem to be alright. Although this might not be the most kumbaya team of all time, LeBron’s teams usually take on the goofy, fun-loving personality of their leader and as such should be on the same page enough to work for a common goal come playoff time. When Kevin Love sits in the fourth quarter of a big playoff game for Channing Frye we’ll see what happens though.

The Eastern Conference will not be the cakewalk that it was last year for LeBron and company and they will have to be playing at a high level in order to make a return trip to the finals. There are two teams in my opinion who can legitimately push Cleveland in a seven game series in the east with a couple of stipulations.

If the Miami Heat can get Chris Bosh back this season and have Wade at least 90% healthy and doing Wade things along with the resurgence of Amar’e Stoudemire and the continued ascension of Hassan Whiteside, they have a real shot to give the Cavs a run for their money.

The bigger fear looms in Toronto though as if the Raptors can have a healthy, in shape and in rhythm DeMarre Carroll back for a potential conference finals to help stymie LeBron defensively. That combined the grit of Kyle Lowry to potentially get the better of his match up with Irving and DeMar DeRozan to force the Cavs to insert Dellavadova in to the lineup to stop him, could serve as a tough match up for the Cavaliers.

Although I think the Cavs are in for a battle to even get another shot at the Warriors or Spurs, at the end of the day I think LeBron will be able to will his team back to the finals for an incredible sixth consecutive season.