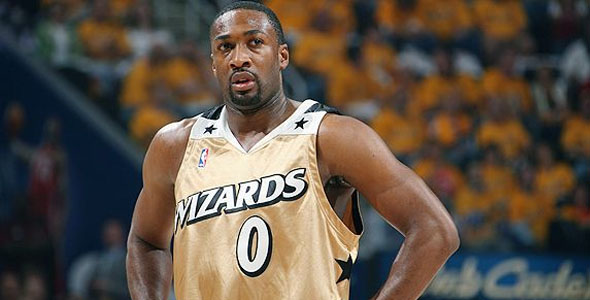 NBA.com reported today that the Washington Wizards were close to a deal with the Orlando Magic that would see the two teams swap Gilbert Arenas for Rashard Lewis. We are now hearing that the deal is done and the trade will go through as originally described.

It shouldn’t be a shock that the Wizards would want to move Arenas after all of the headaches off the court he provided the team with. Between his gunplay incident in the locker room, pooping in a teammates shoe, faking a knee injury, etc., some in D.C. will welcome his departure more than others. It is even less of a surprise when you consider the fact that the Wizards are putting all of their eggs in the #1 draft pick, John Wall, basket to run the point. As for the Magic, Lewis’ minutes and points per game this season have dipped dramatically.

The deal would rid the Wizards of one of their biggest public relations headaches in years. While Arenas helped Washington make the playoffs for the first time in a decade and became an All-Star playing alongside Caron Butler and Antawn Jamison, his infamous suspension for bringing guns into the Verizon Center locker room last December as part of a prank and/or confrontation with then-teammate Javaris Crittenton cast a shadow over the franchise.

Arenas was suspended by Commissioner David Stern for the final 50 games of last season and served time in a halfway house in the D.C. suburbs after pleading guilty to one felony count of carrying a pistol without a license.
Arenas returned to the Wizards this season and has played reasonably well, averaging 17.3 points and 5.6 assists for Washington. He would give Orlando someone who can create for himself and others off the dribble, something the Magic have sorely lacked this season as they has struggled at times against the league’s better teams. And Arenas’ close relationship with Orlando GM Otis Smith, who mentored Arenas while the two were in Golden State, has been well-documented.

Lewis is averaging his lowest point total in a decade for Orlando this season, scoring just 12.2 points a night on 41 percent shooting from the floor. He has struggled at times making the adjustment to playing more small forward this season than he has for the Magic; he thrived as a “stretch four” power forward playing next to center Dwight Howard in previous seasons, but the Magic has opted to give emerging forward Brandon Bass more minutes at that position this season. (via)

I’m interested to see how Arenas will respond to being traded, as he seems to be just going through the motions this season without any fire or passion for the game in which he used to display. The Magic’s J.J. Redick has been playing well at the guard spot with the intermittent absences of Jameer Nelson and Vince Carter, but the Magic will certainly welcome the extra help in the backcourt.

The Magic are certainly hoping that a change of scenery may also provide some second wind for Rashard Lewis’ career as he can be a game changer in the right system.

**Update** – The Magic have made a second blockbuster trade today with the Phoenix Suns that will further shake up their roster. Read the details here.