Anou Enright February 28, 2019 Blogs No Comments on Wade’s Incredible Buzzer-Beater: ‘I told Steph I Needed This One’ 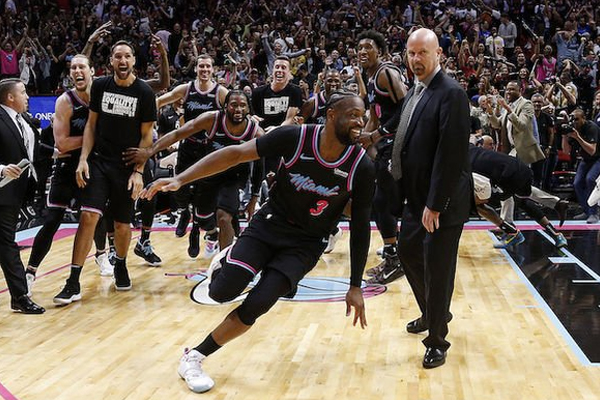 Dwyane Wade is nearing the end of the final season of his legendary career, but he still has plenty of game left in the tank.

“It’s special for me,” he told reporters. “Obviously, as a team, we needed this win bad, but we kept fighting, everybody.

“I’ve been in this position so many times. And so many times, you don’t make the shot. The one I make is a one-legged flick from my chest — it’s crazy. But it’s great to do it in front of the fans.

“This is a fun moment. I told Steph I needed this one on my way out. You all get enough, you got enough.

“I think the one cool thing, for me, is to be able to do this when you’ve got younger team-mates that heard about some of the things you do, but don’t always get an opportunity to see it. It was cool to be able to do it in front of those guys as well.”

Some of the Warriors watched the replay on the overhead screens with a look of disbelief, and after a moment Stephen Curry came over to offer congratulations after presumably their last head-to-head meeting before Wade retires after this season. He acknowledged that he could not help but appreciate Wade’s effort, even as it cost the Warriors.

“There are just a lot of smiles — frustrated smiles from our standpoint,” he said. “But it was something special, him making a play like that in his last year in this building.

“I’d much rather see him jumping on the scorer’s table when we’re not on the court with him, but those are iconic moments that he’s had.

“Deep down, it was cool to see, even though we lost. Moments like tonight kind of remind you of how great he is. It just sucks that it was against us.”

This is Wade’s farewell season, and there will be few, if any, better moments than this one.