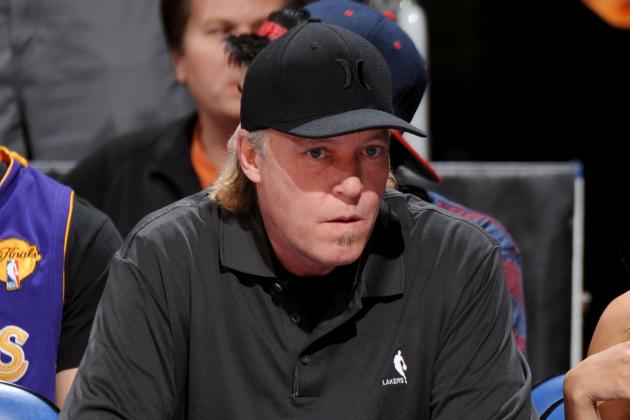 Los Angeles Lakers president of basketball operations Jim Buss may soon be out of a job.

Unless, of course, the Lakers start playing and winning like the Lakers again.

Los Angeles Lakers president Jeanie Buss has said before that the team is rebuilding under a deadline. Specifically, she has said, the Lakers need to make a deep run in the playoffs within three years or her brother Jim will step down from his post as president of basketball operations.

Asked about that deadline in a radio appearance with KPCC on Thursday, Jeanie Buss reiterated that timeline is still in place and that if the Lakers don’t reach their goals by then, she’s ready for change.”Yeah, absolutely,” Buss said. “This is my job. I’m part-owner of the team, but I’m also the president. The Buss family is the majority owner but we have other partners as well who are also shareholders, and I have an obligation to them. Would I make those changes? Yes. My brother understands that we have to continue to strive for greatness, and I think he would be the first one to feel that he would need to step down if he can’t get us to that point.”

She explained the circumstances surrounding that timeline.

“Well, I asked my brother, how long until we’re back into contention? And when I say ‘contention,’ that means past the second round, so either the Western Conference finals or the NBA Finals,” she said. “And he told me that it would take three years to rebuild it. So we’ve just finished Year 1 of that three-year [plan]. So we have two more years until he feels that we’ll be back into going past the second round in the playoffs.”

In sum: Jim might want to start packing his bags now.

The Lakers aren’t going to make a deep playoff run by next summer. It’s just not going to happen.

Next season’s fate has already been sealed after another free-agency period in which the Lakers failed to land a marquee name. They have a healthy Kobe Bryant, a likely bitter Roy Hibbert, a volume-shooting Lou Williams and three viable prospects in Jordan Clarkson, Julius Randle and D’Angelo Russell. But, in the Western Conference, that’s good for maybe 30 victories, and that’s being optimistic.

With a playoff berth in 2016 out of the question, the Lakers need to steal the show during next year’s free-agency extravaganza, signing a handful of stars and high-impact players once Bryant’s pact comes off the books, otherwise they’ll be in a similar position, left to feast on the dregs other teams leave behind.

It’s wholly possibile, if not beyond likely, that the Lakers end up there. Los Angeles doesn’t have the same curb appeal it once did. We’ve seen that these last two summers. And though the Lakers will be a more attractive destination once Bryant rides off into the sunset, they’re in no position to bank on what would essentially be a one-year transition from 25-to-30-win squad to Western Conference contender.

If Jim and Jeanie stay true to their word, the former will be gone in less than two year’s time.