Clippers and KD Have ‘Mutual Interest” in Joining Forces

admin July 6, 2015 Blogs No Comments on Clippers and KD Have ‘Mutual Interest” in Joining Forces 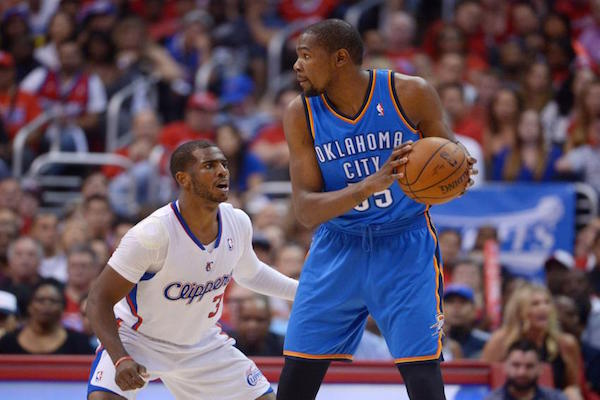 After losing DeAndre Jordan to the Dallas Mavericks, the Los Angeles Clippers are scrambling to ensure they still field a Western Conference juggernaut for the 2015-16 campaign.

They and 29 other NBA teams, that is.

Unlike most of those 29 other teams, though, the Clippers will, it seems, have the ear of the MVP.

This is wholly predictable. The Clippers have less than $46 million in guaranteed contracts on tab for the 2016-17 season, when the salary cap will jump to $89 million. Even after factoring cap holds and other contracts, they should still be able to carve out max space for Durant. And as a team that employs two megastars in Chris Paul and Blake Griffin, they should easily be able to land a meeting with him.

But it’s much too early to start talking about potential destinations. The Oklahoma City Thunder are in the running, because they already have him. The Washington Wizards are threats, because they’ve been biding cap space for years and Durant is a Maryland native.

Every other team is only in the conversation insofar as they’re going to have cap space. And every team is going to have space. What happens between now and next July will truly sort the serious suitors from the non-threats, and the Clippers, intriguing though they seem, could end up on either side of the fence.

They don’t know how they’re going to fair without Jordan next season. They also still need to find an employable center, something they’re unlikely to do now when they don’t have any cash to spend. Any solution they provide is temporary. They’ll need to address the long-term fit moving forward—as in next summer, when Durant is a free agent, and that long-term fit eats into their available spending power.

Indeed, Durant would be wise to at least consider forming a talented trio with Griffin and Paul. But, again, there’s still so much that can happen, that needs to happen, before he enters free agency.

So while it’s obvious the Clippers, just like every other team under the sun, will be interested in Kevin Durant, it’s just too early to tell whether that interest will actually be mutual.