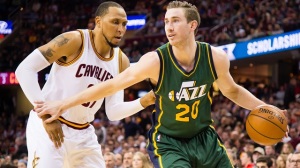 Minutes before the 2015 NBA trade deadline, the Utah Jazz shipped a disgruntled player to a team looking to rid itself of one.

“I just didn’t see me as a fit there,” former Jazz forward Enes Kanter told Anthony Slater of The Oklahoman. “I just wanted to go to a different team.”

Utah found a trade partner for Kanter in the Oklahoma City Thunder, who were eager to send unhappy reserve Reggie Jackson anywhere else before he assuredly bolted during the offseason, shipping the point guard to the Detroit Pistons.

The Jazz added a future first-round and second-round pick, bench-warmer Grant Jerrett, draft rights to Tibor Pleiss and the opportunity to buy out Kendrick Perkins. In other words, absolutely zero immediate help.

But it wasn’t what Utah acquired; Rather, it’s who the Jazz could finally utilize on a full-time basis. They won the trade deadline via addition by subtraction.

By pretty much every measure, the best team in the NBA since the trade deadline is the Utah Jazz.

Rudy Gobert, a 7’2″ shot-blocking machine deservedly nicknamed “The Stifle Tower,” has been nothing short of dominant in the post since becoming a starter. According to NBA.com, he’s swatted a league-high 37 shots and grabbed the second-most rebounds (196) since the trade deadline, Feb. 19.

His presence has helped the Jazz establish itself as the elite defensive crew in the league, boasting a completely absurd 89.7 defensive rating, per NBA.com. The Indiana Pacers, at a distant 94.7, are No. 2.

But Utah’s number becomes exponentially more impressive when considering where it was prior to the trade. Quin Snyder’s team was the NBA’s fourth-worst defense, trudging to a horrendous 106.1 rating, again per NBA.com.

Since stepping into the starting lineup, Gobert has averaged 34.1 minutes, 10.5 points, 14.5 rebounds and 3.0 blocks per outing while converting on 57.8 percent of his field-goal attempts.

He’s registered a handful of ridiculous individual performances, too.

But what Gobert hasn’t simply affected the interior defense. Because opponents are reluctant to attack the rim, the backcourt has been afforded the opportunity to pressure perimeter shooters. Utah has allowed a league-low 28.8 percent three-point clip and 39.1 overall, according to NBA.com.

Most importantly for the Jazz, though, all these improvements have resulted in victories, and since the deadline, no NBA team has earned a better record than Utah’s 11-2.

After opening the year 19-34 in a terrific Western Conference, the Jazz simply cannot finish an amazing comeback to reach the 2015 playoffs. The Thunder (37-30) and New Orleans Pelicans (36-30) are fighting for the eighth seed, well above the 30-36 record Utah holds.

But the front office didn’t finalize the Kanter trade with any illusions of immediate contention. The Jazz added future assets while allowing a potential star to receive his breakout chance, and the interconnected moves have paid off brilliantly in Salt Lake City.

Utah won the 2015 trade deadline. And because of it, they’ll be winning playoff games for years to come.

Unless otherwise noted, stats are courtesy of Basketball-Reference.com and are accurate as of March 17.