admin November 25, 2013 Offbeat No Comments on Next Year’s Hornets Will Go Back To Vintage Purple And Teal 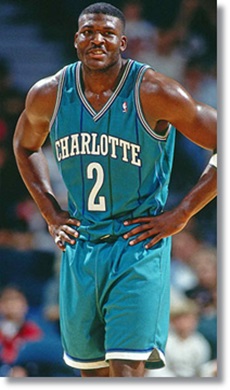 Remember the good old days of the Charlotte Hornets franchise, when Alonzo Mourning, Larry Johnson, Dell Curry, and Mugsey Bogues were the upstart franchise on the rise during the 80’s and early 90’s.

Then during the final years of the franchise, baron Davis and Derrick Coleman helped Charlotte make the Playoffs one final time in 2002, losing to the Nets in the Eastern Conference Semi-Finals

Ever since Michael Jordan took control over total control of the Charlotte Bobcats franchise back in 2010, he has made it public he wanted to bring the Hornets name back to the franchise but couldn’t, as the Hornets were playing in New Orleans.

But now that the Hornets have officially changed their name to the Pelicans, the Bobcats will once again take back their original name, the Charlotte Hornets beginning next season.

And keeping with that theme, Michael Jordan has announced that the Hornets will completely go back to their roots, wearing the original expansion team colors, teal and purple.