Love Will Be Good to Go for Game 3

Anou Enright April 19, 2018 Ryan Bawek No Comments on Love Will Be Good to Go for Game 3 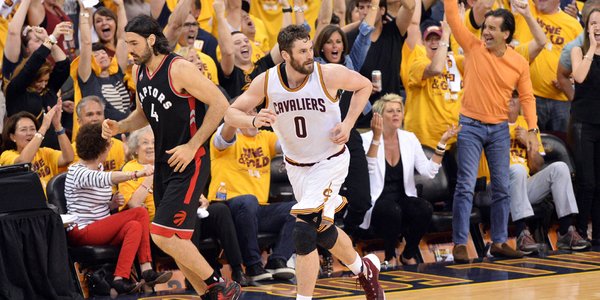 Kevin Love is the x-factor for the Cavaliers in the 2018 NBA Playoffs, as the only star caliber and experienced playoff performer left alongside LeBron, Cleveland desperately needs him to play his best if they want to return to the NBA Finals for the fourth straight season.

Love and the team had a scare on Wednesday night when Love appeared to injure the same hand in which he suffered a broken wrist and missed seven weeks this season.

Some feared he re-aggravated the wrist injury, but according to ESPN he has a partially torn ligament in his thumb and will be able to go for Game 3.

Kevin Love partially tore ligament in left thumb during Game 2 but still expected to play in Game 3, per @mcten pic.twitter.com/48MLjPk1Uu

Thankfully the injury occurred on Love’s left thumb, which means it hopefully wouldn’t effect his shooting stroke too much.

Cleveland will need more from Love offensively going forward as he averaged 12 points on 33% shooting in the first two games of the playoffs.