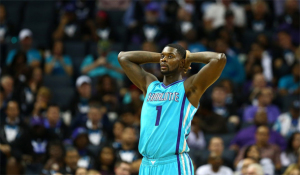 Lance Stephenson signed with the Charlotte Hornets in July 2014, joining Kemba Walker and Al Jefferson on a potentially dangerous team. The franchise had recently earned its first postseason berth since 2010, only the second appearance in 10 years.

Charlotte appeared to need a single piece in order to solidify itself as a perennial playoff team, and Stephenson seemed like an adequate fit.

Plus, the 23-year-old had just compiled a career-best season, tallying 13.8 points, 7.2 rebounds and 4.6 assists per game on the Indiana Pacers. He knocked down 49.1 percent of his attempts from the field, including a decent 35.2 mark from long distance.

Stephenson was entering his prime. On-court antics notwithstanding, it wasn’t inappropriate to think he would only get better. Though nine months later, it’s remarkable how wrong that thought was.

The Hornets dropped $27.4 million on the shooting guard this offseason, according to HoopsHype salary numbers. The payoff? A meager 8.2 points on 37.6 percent shooting along with 4.5 rebounds and 3.9 assists per outing.

However, as pointed out by Grantland’s Riley McAtee, Stephenson will finish the 2014-15 campaign posting the worst three-point percentage—17.1—in NBA history by a player who hoisted at least 100 triples.

Lance Stephenson is about to wrap up the worst 3-point shooting season ever… http://t.co/22KGs4MdKl

Stephenson’s first season in Charlotte has proved itself an abject failure.

Perhaps some of the shortcomings stemmed from unrealistic expectations, that Stephenson was theoretically evolving into the superstar mold. Yet from the outset, Hornets coach Steve Clifford didn’t buy that notion.

Just 16 games into the season, Clifford voiced a striking statement about the fifth-year pro. Per ESPN’s Michael Wallace:

To be fair, one of the things that’s made it more difficult for him is that he came here and people proclaimed him as the next superstar. He’s not a star. He’s a guy that has talent to become a star. To be a star in this league, you have to do it over years.”

Nevertheless, throughout the season, Stephenson—whose year has ended due to a toe injury—was benched during the fourth quarter of tightly contested matchups.

That shouldn’t come as a surprise, considering what should have been Charlotte’s go-to unit of Walker, Stephenson, Gerald Henderson, Cody Zeller and Jefferson has posted a 93.3 offensive rating and 102.1 defensive clip in a team-high 155 minutes, per NBA.com. When Michael Kidd-Gilchrist replaces Stephenson in that lineup, the offensive mark rises to 104.0 while the defensive number stands firm at 102.1.

Just two weeks ago, Stephenson cited a desire for “freedom to let me play through mistakes,” according to the Associated Press.

But after 61 games of his miserable shot selections and direct influence on poor offensive spacing, the somehow-still-playoff-contending Hornets couldn’t let Stephenson make the same mistakes. Any “DNP-Coach’s Decision” was an unfortunate, necessary decision.

Maybe Stephenson will turn it around next season. For the Hornets’ sake, hopefully he does. But Stephenson can’t change the past, and 2014-15 was a historically bad one.

Unless otherwise noted, stats are courtesy of Basketball-Reference.com and are accurate as of April 14.

In First Game Back with Indiana Pacers, Lance Stephenson Angers the Toronto Raptors