Is Tyreke Evans’ Poster on Gary Neal the Best Dunk of the Season? 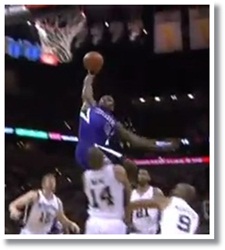 Last season’s NBA Rookie of the Year Tyreke Evans is having a down year. You can call it a sophomore slump or maybe opposing teams are beginning to figure out just how to contain “Young Reke.” Due to both injuries and inconsistencies, the Kings have seen their franchise player’s offensive numbers dip nearly 3ppg from last season, with FG%, assist, and rebounding averages all slightly lower than his ROY campaign totals.

As a casual observer, oft times it appears that Tyreke has been settling to much on the jump-shot, rather than taking the ball to the basket, as he is getting to the line only 4+ times per contest. I get it, with Sacramento mired in yet another horrific year(23-56) that has them headed once again towards the NBA Draft Lottery, and not many offensive threats surrounding him, Evans has to force the issue with the ball in his hands on every possession.

Last season, he proved to be one of the league’s most exciting players by nailing game-winning shots, sinking unreal shots from behind the backboard, and joined only Oscar Robertson and Lebron James as the only rookies ever to average 20 points, 5 rebounds, and 5 assists in their inaguaral season.

After missing over a month due to injuries, Tyreke is back on the hardwood once again getting the best of the opposition by putting up some great all-around numbers and leading the Kings to a winning record(5-4) since his return.

While his individual numbers (16 points, 5 assists) in a recent blowout loss to the San Antonio Spurs this past week were nothing to write home about, one spectacular play is. After securing the ball under the opposing basket, Tyeke drove the entire length of the floor to find Spurs rookie Gary Neal as the lone defender in his path to finishing off the coast-to-coast play. While Neal did his best to slide his feet in time to draw the charge, Evans rose up and posterized the rookie in one of the best facial dunks of the season.