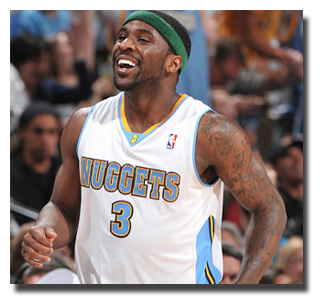 It was certainly a night to remember for Ty Lawson. The former North Carolina standout hit ten consecutive three-pointers on Saturday night as the Nuggets beat the Wolves 130-106. Lawson finished the game with a career high 37 points.

With one more made three-pointer, Lawson would have set a new record for most three-point field goals made without a miss.

Surprisingly enough, Lawson had not made a three-point field goal in the month of April until his barrage on Saturday night.

Here is what Lawson had to say about his career performance:

After their blowout win over Minnesota on Saturday, the Nuggets improved to 17-6 since trading Carmelo Anthony. Including wins against: Los Angeles, Boston and San Antonio.

Since the trade, Denver has been one of the more entertaining teams to watch in the league. Not only is there offense still potent, but the team’s defense has improved as well.

It’s hard not to root for a team who has played so selflessly and valiantly since losing their franchise player.

Denver will enter the postseason as the number five seed in the Western Conference. Therefore, they will most likely be in a first-round matchup against the fourth seeded Oklahoma City Thunder.

As George Karl alluded to last week, I am sure the Nuggets would prefer another first- round opponent than Oklahoma City. Not only did the Thunder defeat the Nuggets twice last week in two hotly contested games, but the Thunder maybe the only team in the Western Conference playoffs that can match the Nuggets athleticism and quickness.

If the two games last week were any indication, the potential series between the Thunder and Nuggets should be long and competitive.

However, the odds of an opening round upset by the new look Nuggets may be higher playing the Thunder than another Western Conference foe.

Check out the video of Lawson’s big night after the jump.

(H/T to Sportige for the Video)