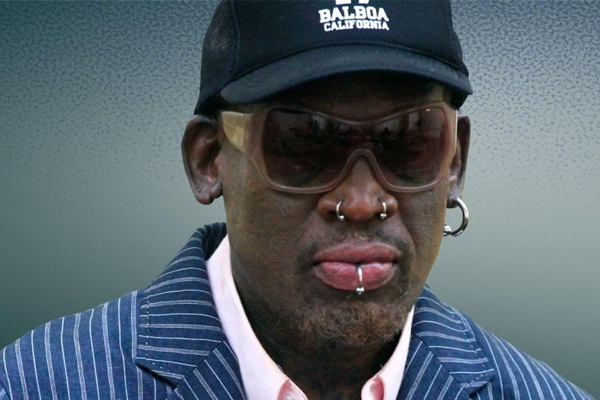 Basketball Hall of Famer Dennis Rodman wants to help keep the peace between the NBA and China.

As the fallout continues after Houston Rockets general manager Daryl Morey’s tweet in support of Hong Kong protesters, Rodman posted a video to his Twitter account. He is seen holding up a photo of himself with North Korea’s dictator Kim Jong Un and a separate photo of himself with President Trump.

While wearing a “Make America Great Again” cap, Rodman says: “Commissioner Adam Silver, I know a thing or two about diplomacy. Book me a ticket to Shanghai with you. Ambassador Rodman.”

@NBA Commissioner Adam Silver, I know a thing or two about diplomacy between other countries. Book me a flight to Shanghai with you! #AmbassadorRodman #Peacemaker #BasketballDiplomacy pic.twitter.com/8Xo580I18p

The former Chicago Bulls star has close ties to both Kim and Trump, and has offered on numerous occasions to help mediate between North Korea and the U.S. He has visited North Korea as a private citizen in 2013 and also set up a controversial basketball game in North korea with former NBA players in 2014.

NBA commissioner Adam Silver issued a statement Tuesday saying the NBA supports Morey’s right to freedom of expression and that the league’s position “is about far more than growing our business.”

“It is inevitable that people around the world – including from America and China – will have different viewpoints over different issues,” Silver said in the statement. “It is not the role of the NBA to adjudicate those differences.”

“This is about far more than growing our business…Values of equality, respect and freedom of expression have long defined the NBA — and will continue to do so. As an American-based basketball league operating globally, among our greatest contributions are these values of the game.”