admin August 15, 2018 Offbeat No Comments on Suns Rookie Deandre Ayton Drew a Picture of Him Dunking All Over Joel Embiid 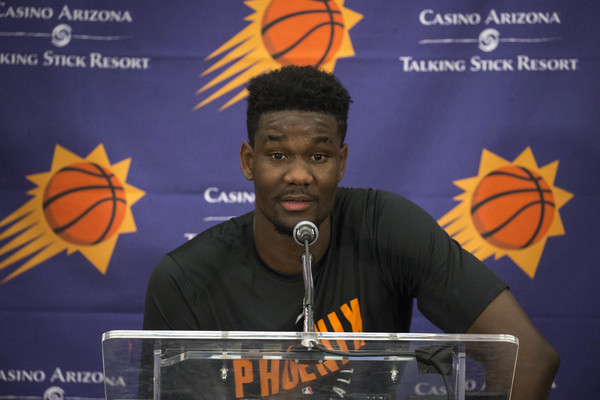 Deandre Ayton has yet to appear in an NBA regular-season game, but he’s already berthing head-to-head to rivalries.

The Phoenix Suns rookie drew a picture of himself on a trading card dunking all over Philadelphia 76ers big man Joel Embiid, and it is as glorious-looking at you might imagine:

I’m going to be honest, if not for the “#WhoIsIt” prompt, I might not have looked that much further into the victim depicted on Ayton’s mini-poster. Sure, there’s the No. 21 on the jersey. But the “Philadelphia” scrawled across the front is barely legible, and that’s putting it kindly.

Once you realize that this is supposed to be Embiid, though, your instincts take over and you cannot help but notice the details. Ayton took more than a few creative liberties. He’s straight clearing Embiid’s body as he puts down his jam. His foot is just over his head. And while he drew himself as this behemoth, Embiid looks closer to a helpless little stick figure.

Speaking of Embiid, he saw this drawing, because of course he did. He’s on Twitter. He was always going to see it. And while it took him a couple of days, he did, in fact, respond:

Welcome to the Joel Embiid-Deandre Ayton rivalry you didn’t know you needed and, frankly, probably still do not need. The Sixers host the Suns on November 19, and then Phoenix returns the favor by welcoming in Philly on January 2.

If you’re looking for a reason to check out what should be a pair of otherwise inconsequential tilts, Embiid and Ayton have now given you one. Here’s hoping for a Sixers victory on November 19 and then a fire Instagram post from Embiid thereafter.