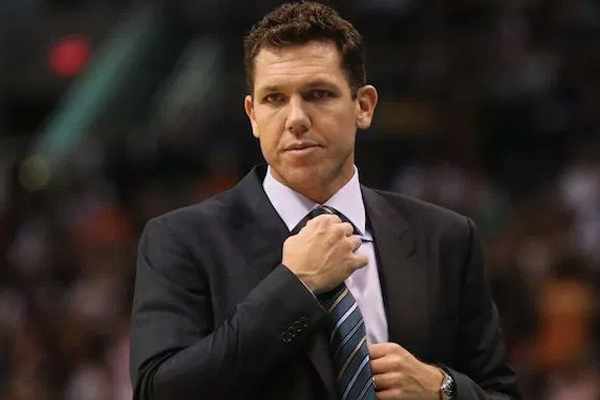 According to court documents, Luke Walton is being sued by a woman who says he sexually assaulted her.

In a lawsuit that was filed on Monday, Kelli Tennant, a former LA Dodgers reporter and Walton’s co-publisher of a book titled “The Transition: Every Athlete’s Guide to Life After Sports”, alleged that Walton forced himself on her in a hotel room while he was the Warriors assistant coach.

Walton responded to the lawsuit, via his attorney Mark Baute, with the following statement:

“Luke Walton retained me to defend him against these baseless allegations,” Baute said, according to Sam Amick of The Athletic. “The accuser is an opportunist, not a victim, and her claim is not credible. We intend to prove this in a courtroom.”

The suit alleges that Walton began forcing kisses on her neck, face and chest. She claims she screamed for him to stop and tried to free herself, but he held her down, groped her breasts and groin, and rubbed his erection on her leg.

Tennant claims she did not initially report Walton’s conduct but was forced to continually interact with him because of her job. She says each time she saw him, Walton would make implied threats by imposing himself on her with big hugs or a kiss, even though she thought she made it clear his advances were unwanted.

“We are aware of the report and are gathering additional information,” the Sacramento Kings said in a statement Monday night. “We have no further comment at this time.”

The Lakers also released a statement.

“This alleged incident took place before Luke Walton was the head coach of the Los Angeles Lakers,” it said. “At no time before or during his employment here was this allegation reported to the Lakers. If it had been, we would have immediately commenced an investigation and notified the NBA. Since Luke Walton is now under contract to another team, we will have no further comment.”

Walton was an assistant coach with Golden State from 2014-16 before being hired as the Lakers head coach. He also played for the Lakers from 2003 to 2012. He was dismissed by the Lakers earlier this month and hired by the Kings.