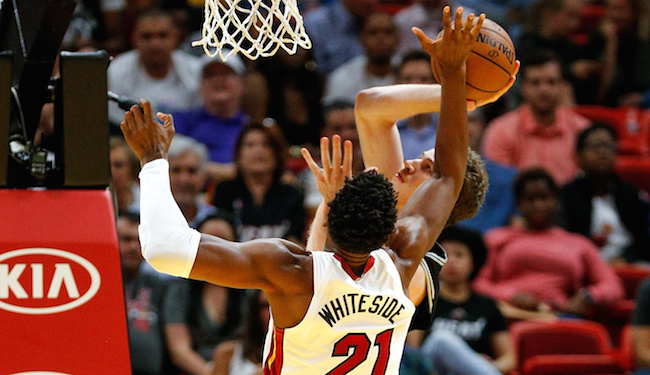 Hassan Whiteside did something Wednesday night that hasn’t been done since 1989. He continued his reemergence with the Heat with a ridiculous 29 point, 20 rebound and 9 blocks performance in the Heat’s 95-88 victory over the Spurs.

The last player to put up that sort of stat line in the NBA is the one and only Hakeem “The Dream” Olajuwon.

Here is a video of Whiteside’s dominance…

Whiteside may not be the defensive presence or leader that the Heat would want him to be and is not worth his current $20 million annual price tag, but he is still a valuable asset with two elite NBA talents: shot blocking and rebounding.

We have a number of truly elite rebounders in the league right now with Andre Drummond, DeAndre Jordan, Rudy Gobert, Enes Kanter etc. and Whiteside is firmly in that tier.