admin October 30, 2017 News No Comments on Eric Bledsoe Has Played His Last Game for Phoenix Suns, According to GM 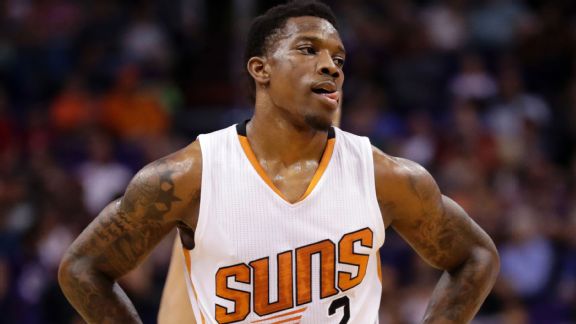 According to general manager Ryan McDonough, Eric Bledsoe has likely played his last game for the Suns. The news comes following a tweet from Bledsoe that said, “I don’t wanna be here.” The tweet caused speculation around the player’s future with the Suns and seemed to suggest that he wanted out. We reported that he may have been suggesting a trade, and new developments suggest that this is very much the case.

McDonough said that he called Bledsoe on the phone after the player sent out the social media message on Sunday. Bledsoe claimed that the message had nothing to do with the Phoenix Suns and that he was actually in a hair salon with his daughter and didn’t want to be there any longer. It was a questionable reason, and McDonough reportedly didn’t believe it.

“I don’t believe that to be true,” said McDonough.

After talking it through with Suns’ owner Robert Sarver and interim head coach Jay Triano, the organization decided that they knew what was best. On Monday, the very next day after the tweet, McDonough, Triano and Bledsoe met up for a chat, and by the end of the talk, Bledsoe was sent home.

The dispute seems to run both ways. Bledsoe has shown distaste and frustration at the direction of the team while the organization thinks that the team hasn’t shown improvements since Bledsoe took over as a key playmaker. The recent NBA results, combined with Bledsoe’s audacious tweet, seem to have sparked the reaction that has led both parties to part ways.

Despite this, Bledsoe is currently the highest paid player on the Phoenix Suns and is averaging a decent 15.7 points per game with three assists. This hasn’t been enough to stop the Suns’ early demise, and the team now stands as bottom favorites to win the NBA Championship with 500/1 odds on BetStars.

Bledsoe has already been linked to preseason trade talks, but general manager McDonough now confirms that he is already discussing Bledsoe with several teams; one of which is allegedly the New York Knicks.

The news of Bledsoe’s alleged departure comes as a triple blow for the team. The Phoenix Suns have yet to win a game this season and have suffered one of the worse runs of losses in the team’s history in the opening few games. Over the three games, they have lost by an average margin of 30.6 points including the 124-76 defeat at the hands of the Portland Trail Blazers.

Just hours after Bledsoe’s now viral tweet, head coach Earl Watson was fired, perhaps for the latest NBA results, or perhaps due to his already fractured relationship with the general manager. Either way, Watson being fired means that the Phoenix Suns are between coaches for the next 79 games. To top it off, just one day later, it seems that Bledsoe, arguably the Suns’ best player, has been removed from the squad and has reportedly played his last game with the team.

It really hasn’t been a good start for the Phoenix Suns, and there is little to suggest that their catastrophic start to the NBA season will get better anytime soon. They play against the Sacramento Kings on Monday. But Bledsoe, as we now know, will not be playing any role in the game.