We May Have Been a Year Early on the Timberwolves

Anou Enright December 13, 2016 Ryan Bawek No Comments on We May Have Been a Year Early on the Timberwolves 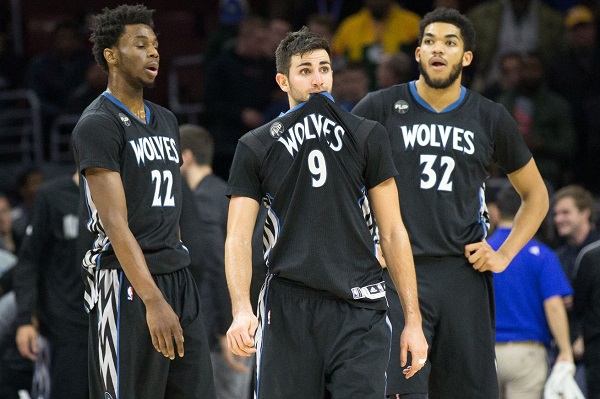 The Minnesota Timberwolves or the Timber-Pups as I like to call them, were every NBA prognosticator and fan’s “sexy” pick to make the leap to becoming a winning team and a new postseason entrant.

With seemingly having the best young collection of talent in the NBA and a well-established coach who is known for his ability to get the most out of his teams, the stars appeared to be aligned for the Timberwolves to be the darling of the NBA and make the postseason for the first time since the 2004 NBA Playoffs when a young, spry Kevin Garnett was taking the league by storm.

Through 24 games of the 2016-17 season, the Wolves are a putrid 6-18 and sitting a half game out of last place in the western conference.

I think the hype train took off from the station a little too soon in Minnesota. Despite having the player under the age of 25 NBA general managers may want to start their franchise in Karl Anthony-Towns and a potential two-way star in Andrew Wiggins, the average age of their core players is just over 22 years old which would have been the age of the best college players in the country 20 years ago, not NBA players expected to lead their team to the playoffs in a grown man’s league.

Towns is 21, Wiggins is 21, Zach LaVine is 21 and Kris Dunn is 22 and a rookie. To expect that crew to seriously compete in the always difficult western conference is a tall task and not very feasible.

Also when you consider the demanding coaching style of new coach Tom Thibodeau and how much of an adjustment it is to assimilate to his coaching style and complicated defensive schemes, there is most definitely a steep learning curve for younger, inexperienced players.

The Timberwolves are currently 27th in the NBA in defensive rating and 24th in team defense, giving up 107.3 points per game despite having the seventh slowest pace of play in the league. That equates to a team not playing a very efficient defense.

Opponents shoot over 47 percent from the field against Minnesota, second only to the Lakers at just over 48 percent.

Kris Dunn is still a ways away from becoming a good NBA player, Andrew Wiggins is struggling to defend in Thibodeau’s system and is still trying to learn to score in a more efficient way and Ricky Rubio is having his least productive and effective season in a few years.

There is no reason to think that Minnesota isn’t well-positioned for the future, or that they might not be a tougher team to beat come March and April, but elevating them to the western conference’s middle class before the season was a little premature given the circumstances.