Kobe Unsure How He Will Handle Final NBA Game 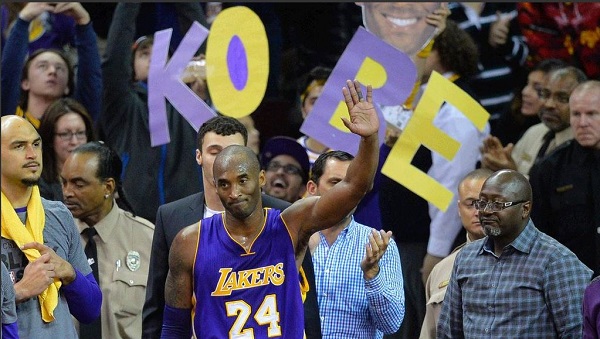 4, that is the number of games left in the legendary career of Kobe Bryant. Kobe has been a mainstay and possibly the most divisive player in the NBA almost since his arrival in 1996. You either love him or hate him.

These last few seasons haven’t been the “riding off into the sunset” that most fans of the game think a legend of Kobe’s caliber deserves but let’s be honest, he is partly to blame with his contract demands later in his career and his need to be “the guy” and run other talented players out of town.

Kobe has always done everything his way and he is going out that way as well. He is as synonymous with the infamous purple and gold of the Los Angeles Lakers as any. Hate him or not it will be bizarre to see a Lakers team without him and even more strange to see him exit the Staples Center for his final game of the 2015-16 season next Wednesday against the Utah Jazz knowing it will be the last time we will ever see him in a Lakers uniform.

Not usually one to show much emotion, the Black Mamba told ESPN LA Reporter Baxter Holmes he can’t really say how he will feel next Wednesday night.

Kobe's not sure what his emotions will be next Wednesday when he plays his final NBA game. https://t.co/yOEvXIp9db pic.twitter.com/CzoVGVVWV9

For a man as obsessed with winning and competing as Kobe, it probably truly won’t hit him that that portion of his life is truly over until the offseason when he has no rehab to undergo and no season to prepare for.

Kobe says he will not prepare any differently for his final game, he will treat it as any other game he has ever played, with the same routine and mindset in order to get his body ready to play his best.

He of course wishes that the circumstances were different surrounding his final game, but has accepted the fact that his playoff and championship days are behind him and the end of the road is here. Here is his response on how he would have wished to go out.

“Yeah, win a championship,” Kobe said, “[but] that s— ain’t happening, so there you go. That’s done. The dream’s done. Dream’s done. For me, it’s coming out and playing in front of the fans and competing hard and playing against Utah, and them not taking it easy at all. They beat us by like 40 the last few times we played them. So I expect them to come and try to do the same thing.”

Kobe is proud that he has stuck through thick and thin with the organization that drafted him in 1996 and has learned to appreciate the highs and the lows.

“..Going through the years of losing and not leaving [the Lakers] makes it all worthwhile standing here and taking the good with the bad and the fans embracing that and understanding that we ride together. That’s a love that you can’t break.”

Kobe may not break out the waterworks next Wednesday night but I can guarantee you the tears and emotion will be emanating throughout the building as Lakers fans see Kobe perform for the final time.