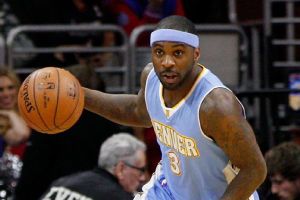 Ty Lawson may or may not be jealous of the Dallas Mavericks.

Sure, on some level he should be. They made the playoffs while his Denver Nuggets did not. That alone paves the way for envy. But the point guard took it a step further on Instagram. Apparently. We think.

We’re not really sure.

Consider this image brought to us by Twitter user Corey Carlson:

Just so we’re clear, we’re talking about the top-most comment, the one that reads: “Ty you should come to Dallas and join the team. Side with Dirk, Ellis, and both Parsons. We could use your defence and your skills.”

This is all kinds of unsettling.

At 5’11”, Lawson is not a good defender. He’s undersized and overmatched on most nights, and while he can accumulate steals, they often come at the price of over-gambling. But hey, I totally get his interest. Lawson isn’t much of an off-ball scorer, but he’s certainly a better fit beside Ellis than Rondo.

More unsettling is Lawson’s response. It doesn’t appear accidental or prank-related. Instead, it looks like he just isn’t happy in Denver, which is totally possible, given how they’ve cycled through head coaches over the last couple years. Perhaps he wants out.

Not that he has a say in the matter. He’s under contract through 2016-17, so unless the Nuggets placate a trade request he has or hasn’t made yet, he’s stuck in Denver. Or maybe not. This thing is all over the place, after.

Previous rumors posited that former Nuggets and current Sacramento Kinds head coach George Karl was interested in dealing for Lawson, so maybe Denver’s point man is hoping for that to reach fruition. He was also linked to some trade chatter ahead of the February deadline. And while it was nothing substantial, the Nuggets are in reset mode. There’s an incentive for them to clean house, shed salary and accumulate draft picks. Dealing Lawson would help them land some prospects and picks while increasing their financial flexibility, provided they don’t take back any long-term salary in return.

Here’s the thing: Even if the Nuggets elect to move Lawson, it won’t be to Dallas. The Mavericks have other issues and lack the trade assets to make a deal happen.

Still, Lawson can dream—assuming, of course, that’s what he’s even doing here.