Was Dayton’s Home-Court Advantage Unfair in Win Over Boise State? 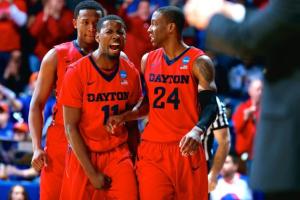 The Dayton Flyers squeaked past the Boise State Broncos in the opening round of the 2015 NCAA Tournament, surviving a last-second shot to win 56-55 at University Dayton Arena in Dayton, Ohio.

Quite a bit of Dayton involved in that game, huh?

Did playing on their home floor provide an unfair advantage for the Flyers, who have now won 22 consecutive games in the building?

“I don’t think that’s the spirit of the NCAA Tournament, as far as — I mean, it’s supposed to be neutral courts and that kind of thing,” Boise State head coach Leon Rice said after the game, according to the school’s official athletics website.

When asked if home-court advantage affected the outcome, BSU sophomore forward James Webb—who finished with eight points and a game-high 13 rebounds—responded with a politically correct answer.

“I mean, everybody notices it when they had their little runs and things like that. But it didn’t matter to us, really. We came out there and played our game. The ball just happened to bounce their way this time.”

In this case, however, a politically correct response was also the proper one. Though the setting indeed was an unfortunate scenario, the Broncos had their chances to win.

They even had the final one.

After Kendall Pollard missed a pair of free throws—home court didn’t help the Flyers forward there—Derrick Marks proceeded to dribble into the corner, where he was double-teamed and fortunately didn’t lose possession.

Foul or no foul on the three-pointer as time expired and the buzzer sounded, the two final sequences of Marks’ college career were forgettable.

Boise State finished the night shooting 40 percent overall, 30 percent from three-point range and 50 percent from the charity stripe, each well below the team’s season averages of 45.8, 39.4 and 73.3, respectively.

Plus, the Broncos misfired on 10 of their last eight 12 and surrendered a seven-point lead following the final TV timeout. Dayton’s fans were certainly loud and involved, but they didn’t cause that collapse.

In the aftermath of the Flyers’ tight victory, the NCAA selection committee has been tagged with a perhaps unwarranted share of blame.

The play-in game—which was created in 2001 and expanded to a four-match set in 2010—has always been held in Dayton. Not once has the pre-Thursday portion of the tournament been played anywhere but there.

And for the first time in 15 years, the Flyers were selected to appear in the opening round. If the committee believed Dayton need to earn its way into the Round of 64 with an extra win, it ought to do just that.

As long as the venue remains what it is, the selection committee must not be forced into altering the brackets to keep Dayton from playing a home game, nor should it leave the Flyers out of the field in order to avoid it.

Either way, that result would simply be wrong to punish a team that deserved a particular spot in the tournament.

Dayton’s victory over the Broncos in Dayton wasn’t an optimal scenario. Should it happen again, it will again be an unfortunate circumstance. But it wasn’t unfair.

Should the Flyers have received a higher seed anyway? Probably. Should a foul have been called on Marks’ final shot? Maybe. Did either of those happen? Nope.

It took 15 years and 30 games for the Flyers to hold a de facto home game in the opening round, and their opponent still had a terrific chance to earn a victory.

But Boise State—not the selection committee, not Dayton, not the fans—messed that one up.