admin January 23, 2015 Blogs No Comments on Nuggets Interested in Trading for Brook Lopez 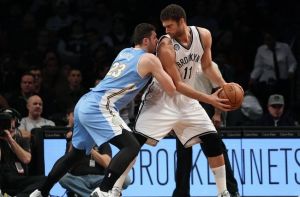 The Denver Nuggets are reportedly interested in trading for the Brooklyn Nets’ Brook Lopez.

Here’s The Denver Post‘s Christopher Dempsey with the deets:

The Brooklyn Nets recently tried, unsuccessfully, to deal center Brook Lopez, which led to the franchise putting the brakes on the whole trading him concept in total.

But when those wheels get back turning again — and they will — there will be no shortage of suitors, and the Nuggets are expected to be among them. They’ve already made one run at it, but were rebuffed along with everyone else by the Nets in favor of negotiations with Oklahoma City, and those talks got intense before breaking down.

But there remains plenty of time before the Feb. 19 trade deadline, and the Nuggets have a lot to offer if they want to gamble. The question is how much to put on the table to entice Brooklyn to get into serious talks. There are inherent risks: Lopez has a player option after this season, so there would have to be some sort of assurances from his representation that he wouldn’t just walk and leave the Nuggets lighter on assets and out one big-time center at year’s end.

This is totally, utterly, wholly weird. Which, in turn, means it’s so Nuggets.

The Nuggets have a penchant for stockpiling talent, even if they don’t really need it. Lopez falls in a gray area. He certainly helps the Nuggets’ 17th-ranked offense, but they also rank 22nd in points allowed per 100 possessions, according to Basketball-Reference. They need defense more than they do offense, and Lopez isn’t their guy. He’s a so-so rebounder who blocks the occasional shot, but he’s not equipped to lockdown the paint night in and night out if he doesn’t have some kind of a safety net—like Kevin Garnett—behind him. And there is no safety net in Denver, only guys like Kenneth Faried, J.J. Hickson and JaVale McGee.

Well, not JaVale McGee, because he’s apparently who the Nuggets are dangling.

For the Nuggets it could be an opportunity to unload center JaVale McGee’s contract, which is an expiring one next season. That’s also part of the problem. It’s not expiring this season. And for any team to take that on right now for a player the caliber of Lopez, there’s probably going to have to be a first-round pick involved and or/young player with sizeable upside included as well.

Unlike some, I like McGee. He makes some bad decisions and he’s been injury-prone of late, but George Karl, a strict, old-school guy coached him toward two-way adequacy. Perhaps the comparably stringent Lionel Hollins could do the same.

McGee, when healthy, adds athleticism and explosion to a snail-paced Nets team. He’ll earn less than Lopez next season—assuming BroLo picks up his player option (likely)—meaning he’ll save the franchise some luxury-tax penalties. Lineups that include both him and Mason Plumlee, while spacing-challenged, would also be super fun.

Still, the logic here on the Nuggets’ behalf is weird, especially if a first-rounder is involved. Lopez himself is injury-prone and, when looking at the big picture, he’s not going to vault them back into playoff contention.

Unless this move comes in conjunction with another one, it just doesn’t make enough sense.

Then again, these are the Nuggets.