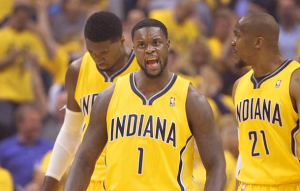 Despite becoming somewhat of a household name within basketball circles towards the end of his final season in Indy, it appeared as if the team was growing weary of Lance Stephenson’s act. If that weren’t the case, maybe they would’ve offered him a bigger contract.

But after only a few months in Charlotte, he has already been rumored to be traded. One potential landing spot was back in Indy. However, it doesn’t sound like his old teammates want him back.

Weekend Trade Rumble: Heard various Pacers were asked if Indy should try to bring Lance Stephenson back. Response NOT one of encouragement