What Makes an NBA Champion? 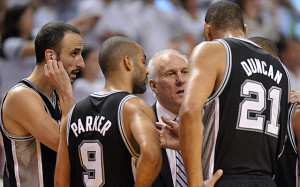 As the 2014-2015 NBA season gets underway, everyone already wants to know how it will end. Will the San Antonio Spurs repeat? Will Cleveland finally win one? When will big market franchises in the basement (Boston Celtics, Los Angeles Lakers, New York Knicks, and the Philadelphia 76ers) return to contention?

The Celtics franchise won 17 NBA titles, their last in 2008 over the Lakers. Now in full rebuilding mode, the green team is developing some nice young talent with point guard Marcus Smart (6.8 ppg), center Kelly Olynyk (13.3 ppg), and power forward Jared Sullinger (14.5 ppg and 8.3 rpg) thru 6 games this season. Boston, 3-4, sits in 9th place in the Eastern Conference. Their offense looks good enough to compete (#2 in the NBA with 106.3 ppg), but the Celtics are at the bottom of the league in most defensive categories (T-27th in opponent’s ppg and T-24th in opponents FG%).

The Lakers have won 16 championships (last in 2010), but right now they are the doormats to a devastatingly strong Western Conference. Kobe Bryant told his teammates to be ready to surprise people this season, but so far, the Lakers are what we thought they are: just not deep or talented enough to compete. How long until the Lakers compete for a title? Will letting Phil Jackson leave for the Knicks haunt the franchise for years to come?

Having won 2 championships, but none in 41 years (1973), the Knicks are back in championship construction mode around star forward Carmelo Anthony, who resigned with the team this summer for a 5-year, $122 million deal. Phil Jackson at the helm, his protégé Derek Fisher as head coach, the Knicks are patiently waiting until next summer, when they will have more financial flexibility.

The 0-7 Sixers are playing some of the worst basketball on both sides of the court, and they have been playing like this since they blew up the marginally successful Louis Williams-Jrue Holiday-Andre Igoudala. Will they ever get it back together? The 76ers have won 3 NBA championships, but none in 31 years (1983).

The Cavs have played for 45 seasons, but only made 18 playoffs, and only went to the Finals once (2007) under the helm of LeBron James and Head Coach Mike Brown. Tim Duncan’s Spurs demolished them.

So, which teams win and why?

I was always taught basketball was about 3 things: defense, rebounds, and free throws. The importance of the first two is hard to argue.

So, does having the best defense assure you an NBA championship?

In short, NO, but compared to rebounding and offense, defense is a better measurement of a team’s playoff success.

Just ask the Chicago Bulls, who have been top 3 in the league in defense since 2011, but only made one Eastern Conference Finals (2011). The best defensive teams in the NBA have won only 3 of the last 15 titles (20%).

Does being the best rebounding team win your team a championship?

The best rebounding teams, or the teams who hold their opponents to the fewest points per game, in the NBA have won 3 of the last 15 titles (20%), but rebounding alone won’t win a title.

So, scoring, then, right? Whoever scores the most, wins, right?

NEVER (not in the last 15 years anyway).

The #1 or #2 ranked offensive teams, meaning the teams that score the most points, have not won a title in the last 15 years.

A championship team is almost always ranked top 10 (maybe top 20) in rebounding. The 2013 Miami Heat were the only exception, being the worst team in the league in rebounding, but still managing to win it all.

A championship team is typically ranked top 10 in offense (or at least top 20). The 2004 Detroit Pistons (#24) were the only team in the last 15 seasons to win the title without being ranked in the top 20 that season in offense, and they were able to do that because they were such a dominant, lock-down defensive team with a team-first offensive strategy.

11 out of the last 15 NBA champions were either both top 10 teams in defense and offense (or close). Of those 11, eight were also in the top 12 in rebounds.

So, championship teams are usually top 10 in offense, defense, and rebounding. More specifically, these teams have a tendency to excel not at making or taking shots, not by allowing or preventing shots, but percentages and efficiency.

Championship teams typically play exceptional defense, getting out on 3-point shooters, while also clogging up the paint, everything a team needs to do in order to decrease shooting percentage.

Offensively, championship teams shoot efficiently, maybe not in field goals, 3-pointers, and free throws, but at least 2 out of the 3.

And, the Spurs have become the gold standard example of the alignment of management, coaching, and players that commit themselves to sacrificing for the greater good of the team in the hopes of winning the championship.

So, what does this all mean? It means the Spurs are in good position to repeat, but the Houston Rockets, Portland Trailblazers, and Brooklyn Nets are ballin’. Cleveland (many hope) will put it together as the season rolls along, but they don’t look like championship material at this particular moment.

Help on the way the next 2 summers is kind of limited, so teams looking to rebuild will have to be creative, draft well, develop players, scout internationally, and develop cohesion between their own players.

But, what’s there to work with? LeBron James probably isn’t leaving Cleveland again. Kevin Love hinted that he might make the move to the Lakers, so he’s keeping that dream alive. Could you get Aldridge out of Portland? Will D-Will ever reclaim his All-Star status?

Great young center Brook Lopez seems oft injured. Centers Gasol and Noah are championship pieces to build around, but can they be convinced to leave their current teams?

What about the teams trying to rebuild?….

The Knicks at least seem motivated to compete, so we’ll see what they can accomplish the next 2 summers.

Boston looks great right now, and they have enough scorers. It looks like they need some better defenders and more veterans, and they might have something.

The 76ers are a long way from anything good, although 3rd year guard Tony Wroten is like found money for them, putting up 21.9 ppg on 44.1% shooting from the field.

The Lakers aren’t going anywhere and haven’t looked good since Kobe went down the first time. With Kobe Bryant back in action and putting up 26.7 ppg and 1.86 spg, the Lakers are still another big man, another big time scorer, a primetime defender, and a better point guard away from being competitive.

The Knicks, 76ers, Celtics, and Lakers will be lucky to make the playoffs this season, although the Knicks and Celtics have a shot in a weaker Eastern Conference if they can close out on the bottom feeding teams.

So, the Spurs are in the mix, so say the experts, but repeating isn’t easy. The Spurs know all about it.

Only 11 teams have ever repeated as champions in almost 70 years. Surprisingly, these 5-time champion Spurs aren’t one of them.

But, NBA champions do repeat about 32% of the time in history.

Phil Jackson called the Spurs out at the beginning of this season, saying the Spurs are, “not a dynasty…they haven’t been able to win consecutive championships.”

This season presents the Spurs another opportunity to prove all the doubters wrong and become an official “dynasty” and repeat as champions.

I think we might see a repeat of 2007 all over again: the Spurs v Cavs in the NBA Finals, but we’ll have to wait and see.