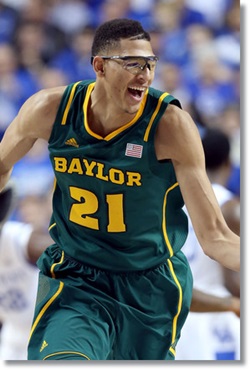 For two seasons, imposing Baylor big man Isaiah Austin has been one of our most favorite players to cover here at THD.

But following cutting his collegiate experience short with the Bears following his sophomore season, the 7’1 shot blocker with the trademark eyewear and condor-like wingspan potentially could go undrafted due to team concerns that he is legally blind in one eye.

Austin sustained the unfortunate injury in middle school but kept it a secret until recently, choosing to come clean rather than have it come up surprisingly in medical reports.

The disability hasn’t affected Austin to this point as he was once a Top 5 rated high school player, starring in the 2012 McDonalds All American and Jordan Brand Classic games.

As a freshman, he was named to the Big 12 3rd Team and helped lead the Bears to an NIT Championship.

After briefly declaring then deciding to return to Baylor last year, the multi-talented big man added the 3 pointer to his arsenal and led the Big 12 in blocks with 119, averaging 3.1 blocks per game.

Late during his sophomore season, Austin decided to reveal the devastating eye injury, also officially declaring for the 2014 NBA Draft.

In his own words, Austin claims that the disability does affect his peripheral vision but has learned to compensate by turning his head to the side on defense, of course having a 7’6 wingspan doesn’t hurt either.

Austin went from being an intruiging late 1st Round prospect that could potentially play any position from 3 to 5 to sliding to late 2nd Round, to now possibly going undrafted.

It would be a shame if a player that was once compared to being the 2nd coming of Anthony Davis misses out on the opportunity to play at the highest level.  Here’s hoping someone late in the 2nd Round gives Austin a chance…