Just because the Los Angeles Lakers don’t have much to play for this season, that hasn’t stopped Nick Young from putting on for his city in sought-after sneakers.

Looking to out-Foamposite himself from his on-court debut of the black ‘Supreme’ Foamposite One last week, Swaggy P keeps the swagoo drippin by breaking out the infamous ‘Galaxy’ Nike Foamposite One from the 2012 Nike Basketball sneaker pack for All-Star Weekend in Orlando inspired by Florida’s outer space pedigree.

Not only is this the last home game for the Los Angeles Lakers for the regular season, players will be cleaning out their lockers and starting vacation earlier than their arena-and-city sharing Clippers counterpart.

Despite not officially having a sneaker endorsement, it is clear that Nick Young favors rare Nike basketball sneakers both on and off court. Brand new performance-minded silhouette or classic basketball sneaker from the 90s, salutes to Swaggy P for putting the kicks to their (original) intended use.

Nick Young scored 41 for the Lakers while wearing the Nike Foamposite One ‘Galaxy’ colorway. 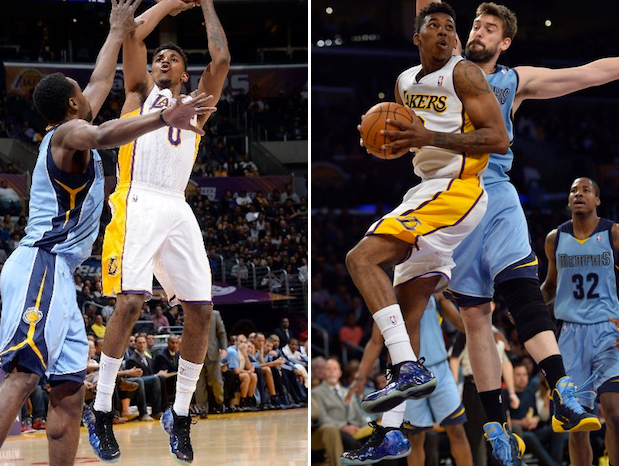