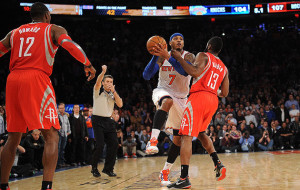 The Carmelo Anthony sweepstakes have taken an interesting turn. According to the New York Post, the Houston Rockets could be in play. Now, that’s interesting. You could argue that Houston sounds more attractive then Chicago. Either way, there will be some offensive sacrifices that will have to be made wherever he goes. If he goes.

The other thing to consider is whether or not Phil Jackson’s arrival has any impact on him at all.