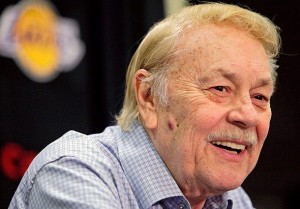 The Lakers have been the talk of the NBA world this year for one reason or another, but now we are forced to realize what really matters. Lakers owner Jerry Buss Jerry Buss was hospitalized as he is battling an undisclosed form of cancer. Many are reporting he is on his deathbed and only has a few days to live at most. We wish him well.

Lakers owner Jerry Buss has an undisclosed form of cancer and is in the intensive care unit at Cedars-Sinai Medical Center, according to several people familiar with the situation.

“He’s doing fine,” Buss’ son Jim told The Times in a brief interview Thursday. “We just aren’t going to make any comments on it. We’ve been dealing with this.”