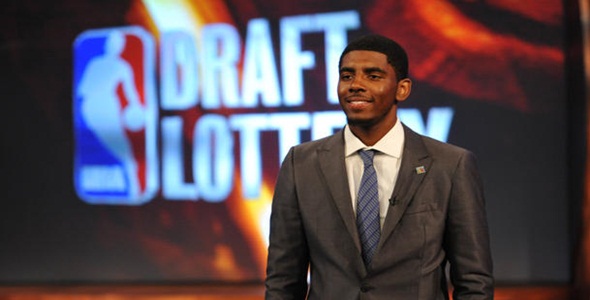 Now that we are roughly within a few weeks of the actual 2011 NBA Draft and all the early entry candidates have either declared or decided to remain in college for another season and the official Lottery draft order is intact, things are starting to come into focus leading up to June 23rd.

Similar to last season with Wall and Turner, the field has shrunk with only 2 prospects, Duke’s Kyrie Irving and Arizona’s Derrick Williams, emerging as the probable first 2 selections.  After that it appears that anything goes as any number of players from Enes Kantner, Brandon Knight, or even Donatas Motiejunas, among others could be chosen with picks #3 through #10.

As such, these Mock Draft rankings are based on potential with this year’s Draft order based on Draft Lottery results and current team records from the end of the NBA regular season. These are only my choices and not the consensus picks of all of The Hoop Doctors writers, with that said here is my 2011 Mock Draft:Version 5.0:

Players stock on the rise:

Kawhi Leonard, SF, San Diego St – The ulta athletic SF prospect measured out extremely well at the combine, having an enormous 7’3 wingspan, which is longer than many center prospects.  He has prototypical size to make an immediate impact from Day 1.  Many mocks have begun to show some love, taking him from probable 1st Rounder to potentially see him creep into the Lottery.

Nikola Vucevic, C/PF, USC – While not many fans on the East Coast have seen him in action during the season, the promising big man has an impressive inside out game and a surprising mobility that bodes well in the pick-and-roll heavy NBA.  After measuring out a legit 6’11 and 3/4 in shoes, with a 7’4 wingspan, and the tallest standing reach(9’4) out of his group, Vucevic seems poised to burst into the late 1st Round.

Marshon Brooks, SG/SF, Providence – It’s surprising that the nation’s 2nd best scorer, behind Jimmer Fredette of course, and after playing in arguably the nation’s best conference(Big East) that more fans don’t know about Brooks.  He measured out with an impressive 7’1 wingspan and despite concerns over his thin frame weighed in heavier than Alec Burks, who has a height  advantage as the top SG prospect.  Brooks can flat out score and is beginning to get some mid-1st Round buzz.

Brandon Knight, PG, Kentucky – Some scouts are beginning to rank Knight as the #1 PG prospect over Irving simply because he both measured out well and was hands down outstanding in drills.  Many also think Knight may have a higher ceiling because of his already impressive long range shooting prowess.  I wouldn’t be surprised to hear him get some consideration for the #1 overall pick by Draft day.

Josh Selby, PG, Kansas – Despite having an up-and-down freshman campaign marred by ineligibility, offensive inconsistencies, and an unwillingness to adhere to coach Bill Self’s offensive scheme, Selby is wowing those in attendance at the combine.  His physical measurements(6’2) quelled any doubts about his percieved lack of height and ranked #1 in vertical leap among all players.  It no secret that the Knicks, sitting at #17, would love to select Selby as the heir apparent to Billups in a few seasons.

Trey Thompkins, PF, Georgia – Despite being a potential Lottery selection prior to last season, Trey hasn’t faired well at the combine.  He came in with the highest (15%) percentage of body fat among all players and compared unfavorably among other PF in drills.  He did fare better in the shooting drills, ranking amongst the better midrange bigs, but his limited mobility opened some eyes.  It appears that Thompkins may slip into 2nd Round territory.

Jimmer Fredette, PG, BYU – As the nation’s leading scorer and national POY, to many, Jimmer has unreal expectations.  He measured out about what was expected(6’2 in shoes) but  had the smallest hands of any PG in attendance.  After initially being projected as a late Lottery selection during the season, Jimmer has slipped way down into the 20’s.  Many are concerned he is JJ Redick V2.0.

Jonas Valanciunas, C/PF, International – While many consider Jonas the best international prospect on the board, and projected as high a the #4 pick by Cleveland, some teams looking for an instant impact player may want to reconsider taking him so high.  Even though he is a raw 19 year old 7 footer who is a surefire Lottery pick this season, the Lithuanian big man has hinted that he doesn’t feel he’s ready to play at the highest level just yet.  He may slide a bit to a team that doesn’t have a pressing need next season as he will undoubtedly need to be bought out to become an NBA player.

Kyrie Irving, PG, Duke – While most think Irving made the right choice in skipping the workout portion of the combine, it has narrowed the gap between he and the #2 rated prospect Brandon Knight.  He measured in at a respectable 6’3 in shoes but sent up a few red flags weighing in at 191lbs and an alarming 10% body fat.  Some are beginning to question whether a player with 11 NCAA games to his credit, coming off of a serious injury, and appearing out of shape is worthy of the #1 pick.

Jordan Hamilton, SG/SF, Texas – Measuring in at an impressive 6’8 in shoes, which was an inch or 2 taller than expected, was a good thing.  But struggling and finishing near the bottom among other prospects in his group during drills doesn’t.  Although he displayed an adept 3 point shot during the season, Hamilton struggled to find his shooting stroke in the drill portion of the combine.  Add that onto the perception that he sometimes bristles with authority and some teams have already begun to recoil.  I still believe Jordan to be a promising NBA player but several mocks have him sliding to late 1st Round.