No Yao, No TMac, No Problem: Rockets Crush Lakers in Game 4, Tie Series 2-2 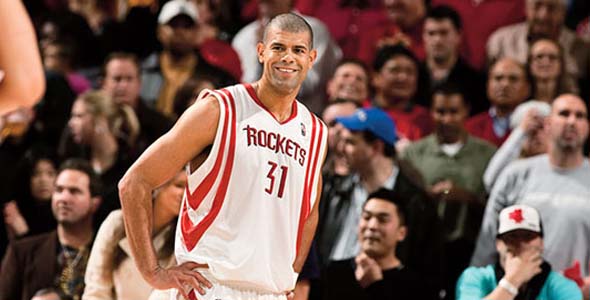 All of Houston hung their heads when word was released yesterday that Yao Ming was out for the remainder of the playoffs with an ankle injury. But the Houston Rockets players didn’t hang their heads. Instead they came out in today’s Game 4 match-up against the #1 seeded Los Angeles Lakers are dominated their opponent from start to finish, tying the series at 2-2.

After the first quarter with the Lakers down by double digits, Phil Jackson was interviewed and asked why the Lakers were being beaten so badly at the start. He stated that the Houston Rockets were playing on emotion. He followed that quickly with a a comment that “teams that play with that much emotion expend a lot of energy, and NBA basketball games are 48 minutes long.” It was sort of a backhanded comment towards what he thought would be the Rockets inability to sustain their momentum and hot shooting for an entire game.

Phil Jackson is a basketball genius, but in this case he couldn’t have been more wrong.

The Houston Rockets not only maintained their hot start, but actually pulled away even further in the second and third quarters building their lead to as many as 29 points at the end of the third. The Rockets dominance was punctuated with 0.7 seconds left in the third when Artest lobbed an inbounds pass from half to a wide open Aaron Brooks for a lay-up. The LA Lakers for the first time in the post-season, and possibly the first time in the playoffs were exposed for their poor perimeter defense, as the Rockets guards had open look after open look from everywhere outside the paint.

While the Rockets couldn’t dominate the paint like they normally do with Yao Ming, they did however surprise the masses by dominating the glass. Time and time again the Rockets front court of Luis Scola, Ron Artest, and Carl Landry corralled offensive rebounds against the much bigger Lakers front court of Pau Gasol, Lamar Odom, and Andrew Bynum.

The biggest coo for the Rockets however was their commitment to team and individual defense. They guarded the perimeter to perfection, helped in the paint on the Lakers bigs, and Shane Battier did about as good a job on Kobe Bryant as anyone i’ve ever seen. Although the Lakers made a mini-run after the game was already completely out of reach in the 4th making the score seem closer than the game really was at 99-87, the Rockets dominated the game in every way that matters.

So with the Series tied 2-2, no Yao Ming, no backup center in Dikembe Mutumbo, and no superstar scorer in Tracy McGrady, can the Rockets really pull off the improbable and take down the might LA Lakers? Normally i’d say no, but after the complete and utter dominance I witnessed today. I would say we may want to ‘wait and see’ before making any predictions…I think the Rockets have earned that much respect.