Kevin Durant’s Neighbor: Stalker or Part of a Marketing Campaign? 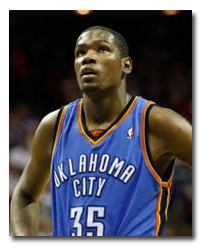 If there’s one guy in the league who is the next best thing and primed to take over the Association, it’s Kevin Durant. At just 21 years old, he was the youngest scoring champ in league history a year ago, dropping more than 30 points a night. He accomplished that in impressive fashion by scoring at least 25 points in 29 consecutive games en route to doing so. For an encore, he led Team U.S.A. to a gold medal a few months ago in the World Championships in Turkey where the entire world had the opportunity to see what a beast he is. Couple his multi-faceted game with the fact that he’s extremely marketable and he becomes a can’t miss – regardless of what ever it is you’re talking about.

It’s natural for a guy like Durant to have fans, but it appears that he may have a stalker by the name of Mathias Murphy. Some people call Twitter organized stalking and this kid is the reason why. In the series of videos below, Mathias tapes Kevin Durant, apparently without KDs knowledge or consent (in most of the videos), and posts them to his Twitter account and YouTube. It chronicles Durant moving next door to this Thunder fan and this little kid wants the world to know who his new neighbor is. But is it legit or is it an innovative marketing campaign? While I’m sure Durant has obsessed fans, this kid comes across as somewhat of a polished actor which makes it a tough call. You be the judge:

Mathias outside of Durant’s soon-to-be house

Move in day for Durant

Durant shooting around in his driveway

Durant taking out the garbage

Apparently, Durant learns of this kid stalking him and invites him to his house (Notice he has on a Nike T-shirt. I’m just saying)

To me, the whole thing has a LeBron/Kobe Nike puppet commercial feel about it. That’s why I’m leaning towards it being part of some sort of marketing campaign. So what do you think? Is it legit?