6 Thoughts on the First Week of the NBA Season

admin November 2, 2010 Blogs 1 Comment on 6 Thoughts on the First Week of the NBA Season 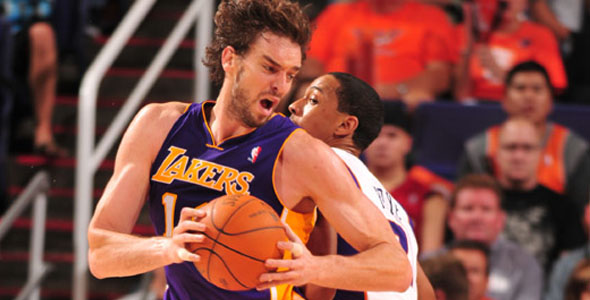 Through the first three games of the season, the third year center is averaging 18 points and ten rebounds a game for the Indiana Pacers. Hibbert only averaged nine points a game in his first two seasons in the league. While it is still too early to be sure, we may be witnessing the blossoming of a young star center. If Hibbert keeps up his current pace and Danny Granger and Darren Collison play up to their potential, the Pacers could contend for a playoff spot in the Eastern Conference.

Pau Gasol took home Western Conference Player of the Week honors for the first week of the 2010-2011 season. In three Laker victories, Gasol averaged 25 points, ten rebounds and five assists, while shooting 52 percent from the field. If you want to read about Gasol possibly emerging as the Lakers best player this season, I discussed it here a few weeks ago.

Despite being blown out by LeBron James and the Heat on Sunday night, the Nets won their first two games of the season against the Pistons and Kings. While the Pistons and Kings are not necessarily powerhouse basketball teams, it is still a significant start of the season for New Jersey. The Nets did not win their second game last season until December 8th. With new coach Avery Johnson and new principal owner Mikhail Prokhorov, the Nets seem to be headed for a huge improvement in 2010-2011.

4. What is Eating Hedo Turkoglu?

What has happened to the Turkish Michael Jordan? Friday night against the Lakers, Turkoglu was almost non-existent and seemed lost at times during the course of the game. Through three games with the Suns, Turkoglu is averaging only nine points a game. It looks as though Turkoglu is still in a funk from his one year stint in Toronto. If Turkoglu does not return to his old form, Phoenix will be headed for the draft lottery, instead of the playoffs.

It appears the young point guard is picking up where he left off in last year’s postseason. After the first three games of the season Rondo is averaging 17 assists per game, to go along with ten points and six rebounds. Friday night against the Knicks, Rondo had a triple double, which included 24 assists. If Rondo keeps these numbers going and the Celtics are contending for the top spot in the Eastern Conference at year’s end, expect Rondo to get some MVP votes.

The breakout star of last year’s NCAA tournament, Gordon Hayward is off to a stellar start in his first professional season with the Utah Jazz. The rookie had a stellar preseason, which including a 26 point performance against the Lakers. Through three regular season games, Hayward is averaging six points a game, in 20 minutes of playing time. It seems as though Hayward is going to be a good fit in Jerry Sloan’s scheme. Hayward is a great example of a player who can utilize his basketball fundamentals more than his natural athletic ability to have an instant impact in the NBA.