Could 2010 be the Year Pau Gasol Emerges as the Lakers’ Best Player? 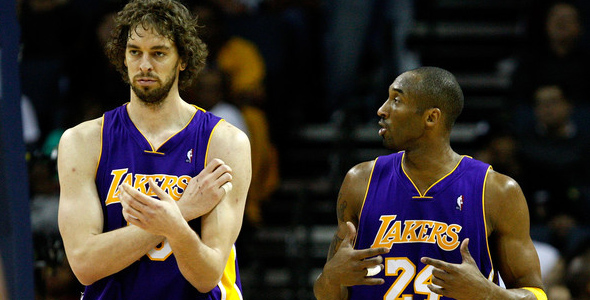 Since coming to the Lakers midway through the 2007-2008 season, Pau Gasol has played a huge role in leading the Lakers to winning back to back NBA championships, making three straight finals appearances, and making two straight All Star and All NBA third teams. In doing so, Gasol has solidified himself as arguably the game’s best all around post player. After two and a half seasons with the Lakers, Gasol’s futile days as a member of the Memphis Grizzlies seem like a millennium ago. In the 2008 finals, his first with the Lakers, Gasol did not quite live up to expectations. After the 39 point blow out loss to Boston in game 6 of the NBA Finals, Gasol was labeled soft, by fans and media alike. Determined to erase the soft tag he acquired during the 2008 finals, Gasol came back in the 2009 finals and played stellar defense against Dwight Howard and averaged 18 points, 11 rebounds, and 2.5 assists for the entire postseason, as the Lakers won the NBA championship. In the 2010 playoffs, Gasol went a step farther in erasing his soft label. Gasol and the rest of the Lakers got a second chance in the 2010 finals, against the Boston Celtics. Gasol outplayed all of the Boston big men, as the Lakers got their revenge, as they beat Boston in an epic seven game series. While Kobe Bryant took home the NBA finals MVP award, Gasol just as easily could have taken home the hardware. For the 2010 postseason, Gasol averaged 19.6 points, 11 rebounds, 2 blocks, and nearly 4 assists a game. Not to mention, in the deciding game 7, Gasol had 19 points and 18 rebounds.

The 2010-2011 season will not only be another resume bolstering campaign for the game’s most talented big man, but it could also serve as the year Gasol is considered to be the Lakers’ best player, with all due respect to Mr. Kobe Bryant. Gasol is in the prime of his career, coming off an off season of rest and relaxation (after the 2008 season, Gasol competed in the Beijing Olympics and after the 2009 season played on Spain’s national team) and most importantly will have a full steam of confidence, after silencing his critics, by helping beat Boston. Once opening night rolls around, Andrew Bynum will be on the sidelines in a knee brace, once again. While Kobe Bryant is expected to play significant minutes, once the regular season starts, it is likely he will not be at full speed after recovering from his own off season knee surgery. This will leave Gasol to lead the charge, as the Lakers begin their quest for their third straight championship.

So, as Kobe and Bynum get back to full speed from their respective knee injuries, Gasol has a legitimate shot to lead the team in pivotal statistical categories. There is no reason to believe Gasol couldn’t lead the team in: points, rebounds, blocks, and minutes played. Now, let’s pretend when Bryant and Bynum do return to their old selves, Gasol continues to be the Lakers’ best player statistically (this could realistically happen, especially if Kobe takes a backseat to Pau and conserves himself for the postseason), while the Lakers end the season with the league’s best overall record. If both of these things happen, it is not a stretch to think Gasol could get a few MVP votes. I am not the only writer who thinks this is a possibility. Brian and Andrew Kamenetzky elude to the same possibility, in a September Blog on ESPN. While I do not expect Gasol to take home the MVP trophy this spring, if he ends up emerging as the Lakers’ go to guy and leads the Lakers in scoring and Los Angeles grabs the best overall record, it is not a stretch to think he could get a vote or two. As good as Gasol has been the last three seasons, 2010-2011 will be a career year for the Spaniard. After this season, the only thing that will seem more distant than his days in Memphis, will be the days of Gasol being labeled soft.