admin October 23, 2018 Blogs No Comments on Joel Embiid Wants to Win NBA’s Defensive Player of the Year and MVP in Same Season 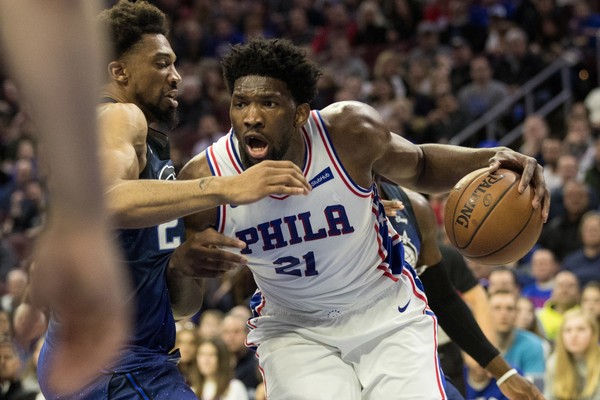 Joel Embiid has some lofty expectations for how he’d like this season to end.

He obviously needs the Philadelphia 76ers to make the playoffs, because that’s who he is. He’d obviously like to win a title as well, because duh. Earning another All-Star bid is probably an afterthought for him, too. He’s moved on to tougher tasks—like trying to win both Defensive Player of the Year and league MVP.

The 76ers signed him to a five-year, $148 million contract. That bears repeating. He’d played in exactly 31 games of the 246 for which he’d been on their roster, and yet they decided that those 31 games were transcendent enough to warrant face-of-the-franchise type of money. And it appears they were right to give it to him. Last year, Embiid averaged a double-double, became an All-Star, and finished second in Defensive Player of the Year voting. This year, he says, he’ll be upset if he doesn’t win DPOY and MVP. Michael Jordan and Hakeem Olajuwon both won it in the same year. “It would be good to follow up those guys,” he says.

At least one half of this goal isn’t that farfetched. Embiid finished second in DPOY voting last year. The Sixers are off to a topsy-turvy start on the less glamorous end, but he’s both imposing at the rim and as switchable as bigs come. If they hover around seventh or better in points allowed per 100 possessions, he’ll have a case.

Winning MVP is harder—much harder. The field is deeper, and voters tend to gravitate towards guards and wings these days. The last big man to win the Maurice Podoloff Trophy was Dirk Nowitzki in 2006-07.

It helps that Embiid plays in the Eastern Conference, since headlining an elite team is a prerequisite for the award. It also helps that other squads will have starts take votes away for one another. Think Stephen Curry and Kevin Durant, Chris Paul and James Harden, etc.

But Embiid has his own star to tussle with, in Ben Simmons. More importantly, the Sixers may not be ready. Fair or not, the final record matters. Unless they’re boasting a top-four, top-five league record by season’s end, Embiid will have to individually outshine the likes of Anthony Davis, Giannis Antetokounmpo and even LeBron James.

Good luck with that.