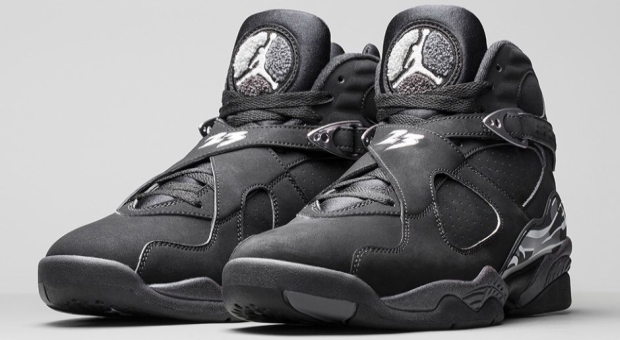 Jordan Brand continues to feed the streets what they crave: good Air Jordan Retros as seen by the return of this popular Retro+ colorway from over a decade ago.

In its first re-release since 2003, the Jordan 8 ‘Chrome’ features a a smooth nubuck-like upper drapped in black with chrome/silver accents seent throughout the sneaker. The chenille (varsity-like felt) patch on the tongue has the iconic Jumpman symbol and is the most popular detailing of the AJ8.

History runs deep in the achievement lineage of the Jordan VIII most noteworthy being that it was in the original Air Jordan 8 that Michael Jordan led the Chicago Bulls to win a third-straight NBA Championship and cap off the first ‘three-peat’ of the dominant Michael Jordan era.