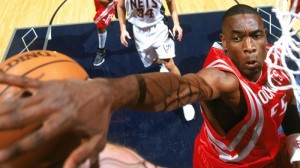 Undoubtedly the funniest moment of the night will probably come when 8 Time NBA All Star Dikembe Mutombo takes the podium, as in addition to being one of the all time “Good guys” in Association history, his one-liners, “Cookie Monster voice”, and infamous “Finger Wag” after a momentous rejection have provided tons of comic relief over the course of his legendary career.

Despite winning the NBA Defensive Player of the Year 4 times, many feel that the 7’2 native of the Congo was overlooked during his career as he put up monster block and rebounding numbers during the 90’s and 2000’s, two decades dominated by all time Association big men like David Robinson, Akeem Olajuwon, Patrick Ewing, and Shaquille O’Neal.

Many pointed to his rather mediocre offensive game as he averaged just 9.8 ppg for his career, but he led the NBA in rebounding twice snagging more than 12,000 boards, and ranks 2nd all time in career blocks behind only Akeem Olajuwon.

Of course, “Mt Mutombo” will always be known for his iconic celebration when his Denver Nuggets became the first #8 seed to beat a #1 seed in the 1994 NBA Playoffs, setting a PLayoff record that still stands today, swatting 31 shots in a 5 game Playoff series.

He also was undervalued as a winner, as he helped numerous teams make the postseason 13 times in his career, perhaps most memorably helping the Allen Iverson led 2001 Philadelphia 76ers all the way to the NBA Finals, but lost in an iconic battle against the much larger Shaquille O’Neal as the LA lakers finished off a 3-Peat.