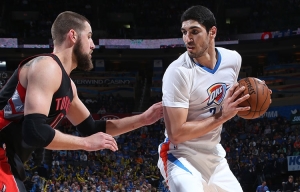 Apparently the Portland Trail Blazers, much like the Philadelphia 76ers, want all the big men.

With LaMarcus Aldridge and Wesley Matthews officially headed elsewhere, the Blazers have a boat load of cap space and no star to spend it on. So, naturally, they did the only thing left to do: offer restricted free agent Enes Kanter a four-year, $70 million contract.

Offer sheet for Enes Kanter, per source, is a four-year max deal for approximately $70 million, with a player option for year four.

The Thunder now have 72 hours to match, and the Blazers better freaking hope they match, otherwise they’ll be left with Kanter. For four years. And $70 million.

That’s a ludicrous price tag, even with the salary cap set to explode in 2016 and then again in 2017. It’s straight up reckless.

For starters, the Blazers already have a crap ton of big men on the docket. They signed Ed Davis, traded for Mason Plumlee and already have Chris Kaman and Meyers Leonard on the roster. Landing Kanter would give them five players who are best suited at the 5.

It’s even dumber when you consider that Kanter isn’t really a threat when he’s stationed more than 10 feet away from the basket. More than 75 percent of his total shot attempts came inside 10 feet of the hoop while in Oklahoma City, according to Basketball-Reference. Quinn Snyder tried using him as a stretch 4 in Utah, but that experiment went to hell pretty quickly.

Actually, that’s not true. He definitely moves the needle. Down. Way down. He ranked as one of the league’s worst rim protectors last season, per NBA.com, and because he doesn’t play above the rim to begin with, he’ll never be a true shot-blocking threat.

Sinking $70 million into Kanter isn’t a way to accelerate that process, especially given the Blazers’ current roster.