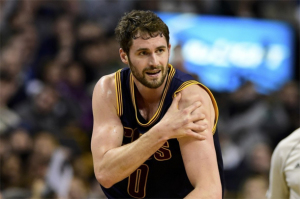 Kevin Love left Sunday’s game 4 clincher for the Cavs with a dislocated left shoulder. His arm got locked up with Kelly Olynyk’s and the result wasn’t favorable for Love. Olynyk denies any ill intentions, but the video clearly shows him yanking down on Love’s arm.

In any event, Love said he arm felt fine afterwards, but he’s expected to miss at least 2 weeks. The best thing that can happy for Cleveland is a long Bulls-Bucks series.

“If it’s the first time ever happening, you can usually shut those guys down in a sling and start to rehab them, and they can be back in two weeks, three weeks.”

The surgeon said he knew just from looking at the play on television that Love had dislocated his shoulder. “I thought the way he ran off that it was dislocated, just because of the mechanism for what happened to him and the urgency with which he ran away,” Gobezie said