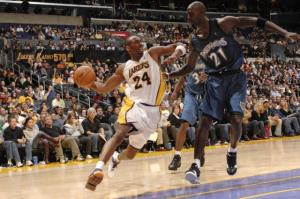 The 1996 draft class is legendary, but the NBA world was almost turned on its axis. The Timberwolves had the fifth pick that year and selected Ray Allen, then traded him to Milwaukee for Stephon Marbury. But the team thought about taking Kobe. What would a KG-Kobe pairing have looked like?

“We teetered on the idea of getting another one because we had success with KG,” Saunders said before the Lakers’ 101-99 overtime win over the Timberwolves on Wednesday at Target Center. “But we kind of thought it would be too much having two of those guys who were young at that time and still in the process of developing KG as a young player.”