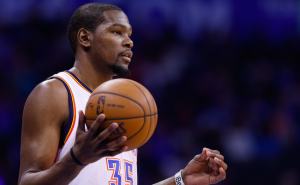 With Serge Ibaka out, the Thunder can use all the help they can get. Having KD back on the court would certainly give them the help they need to make the playoffs. But it appears that Durant has suffered a setback with his foot injury.

He was supposed to return to action this week or next, but was held out of practice, citing soreness in that foot. Not good.

“Just he experienced some soreness,” Brooks said. “I think when you go through rehab, we all know through the rehab process you’re going to have some peaks and valleys, and you just have to adjust accordingly. That’s why he was off today, and he’s definitely not playing tomorrow. That’s all part of the process with his rehab.”

That’s Brooks-speak to try and deflect away the fact that new soreness shouldn’t really be “expected,” right? Durant returned to go through parts of practice last Saturday, and seemed to be getting closer to returning, and now he’s got soreness that’s holding him out of practice. The whole idea with this new screw was to try and eliminate the soreness that was limiting him. Apparently that’s not happening.