Brandon Jennings Out Rest Of Season With Ruptured Achilles

admin January 25, 2015 Blogs No Comments on Brandon Jennings Out Rest Of Season With Ruptured Achilles

During the 3rd quarter of the Pistons/Bucks game on Saturday, January 24th, Brandon Jennings left the game in a wheelchair. Always entertaining on social media (and changing/deleting his accounts on the regular), Jennings has kept the public in the know about this injury through a combination of Instagram picture captions and Tweets.

His most recent Instagram picture shows Mr Bloodline in a hospital gown & wrapped ankle. The corresponding caption reveals that Brandon would be out of league play for between 6-to-9 months. Also through his Twitter feed, Jennings left words of encouragement for his teammates; which is a great sign for Pistons fans as he finally looks to be ready to accept the role of leader both on-and-off the court.

This is such an unfortunate injury as Brandon Jennings was averaging 14 points, 6.5 assists, and a steal while playing about 28.5 minutes a game this season. Detroit also suffers as they lost their first game with Jennings against the Raptors.

Good for Brandon Jennings breaking his previous sigma as a selfish player; wish him a speedy & proper recovery.

Not being able to play basketball is the worst thing.

It's a opportunity for someone else now to step up and ball out. Let's keep it Rollin' Fellas. 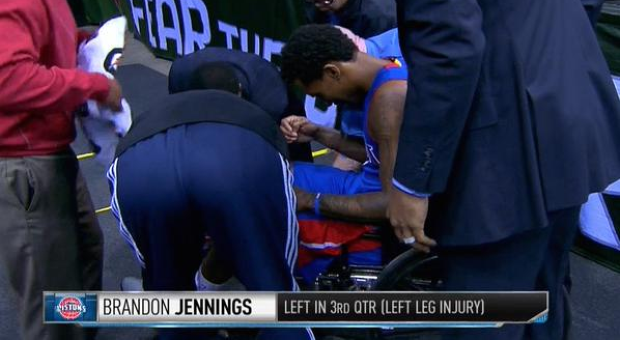