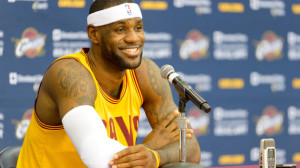 Remember in 2008 and 2012 when participating in the Olympics was cool again? Well, it sometimes has that uncool 2004 feeling at times. While many guys, such as Kevin Durant, says he’s down for 2016, LeBron James is on the fence.

No surprise here. LeBron realizes he’s no spring chicken anymore and he’d probably like to minimize risk of injury, even if he means turning down another gold medal.

“I’m nowhere near there,” James said. “I haven’t even thought about it too much. Obviously I know what’s going on and what’s happening. I haven’t decided.”