Cavs Haven’t Told Andrew Wiggins He Might Be Traded

admin August 4, 2014 Blogs No Comments on Cavs Haven’t Told Andrew Wiggins He Might Be Traded 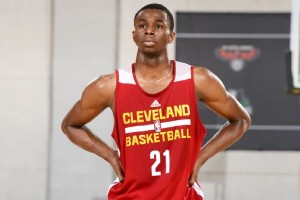 Although the Internet is alive with Kevin-Love-to-the-Cleveland-Cavaliers trade rumors, and although Andrew Wiggins remains the purported centerpiece of anything and everything the Minnesota Timberwolves would receive in return, the rookie still hasn’t been informed of any potential deal, according to CSNNW.com’s Chris Haynes:

Timberwolves owner Glen Taylor told the St. Paul Pioneer Press to expect Love traded by the end of the month. That means one side of the two major pieces has allegedly been assured relocation.

In speaking to key members of Wiggins’ camp on Aug. 2, they adamantly maintain to CSNNW.com that the Cavaliers have not informed them a trade is forthcoming. This is even despite NBA’s online store recently discontinuing Wiggins’ jersey, Kevin Love withdrawing from World Cup play and Anthony Bennett being held out of pickup games.

All signs point towards a transaction.

“As of now, Wiggins anticipates remaining a Cavalier,” one source close to the rookie said.

This could all mean nothing, as Haynes himself would inevitably point out.

That Wiggins and his camp and the Cavs aren’t admitting there may or may not be a deal in place could be standard practice. Teams, front offices and agents are hardly forthcoming when it comes to these things. The Timberwolves’ owner, Glen Taylor, has been uncharacteristically candid during this time, probably because Love has put his organization’s proverbial balls in a vice, and he cares more about his team than preserving privacy.

It’s also smart. Let the world know this is on Love. The losing and all that nonsense may not be—a majority of it, in truth, is on the departed David Kahn—but the outcome of this soap opera falls solely on him now.

The Timberwolves clearly want him. They’ve made that much clear. Being forthright only helps put more of the blame on Love, so they have an incentive to tell the truth—the whole truth and nothing but the truth.

Wiggins and the Cavaliers are in a different situation.

If you’re the Cavs, you don’t want to say anything and then have the deal fall through. It would be like when a certain Boston Red Sox first baseman talked about how much he wanted Alex Rodriguez at shortstop the following season, only to see the Texas Rangers strike a deal with the New York Yankees. Or something like that.

For Wiggins, you don’t want to say something you’ll wind up regretting, whether it pertains to the Cavs or Timberwolves, hence his diplomatic responses during a rather awkward interview while at the NBA’s rookie photo shoot:

He’s clearly uncomfortable answering questions, but personally, I think he did a good job. This is a tough situation to be in for him, especially if the Cavaliers actually haven’t told him what the hell is going on.

After signing his rookie contract, he cannot be traded until later this month, at which point, if he is traded, you’d like to think he knew it was coming, or could possibly happen.

At this point, so early in his career, common courtesy dictates they tell him something, He’s a rookie. Novices don’t typically go through these kinds of trade rumors this early, let alone No. 1 picks. So for his sake, hopefully the Cavaliers are telling him something.