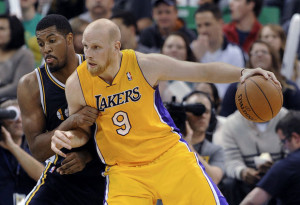 After having a rough season with the Los Angeles Lakers, Chris Kaman has agreed to a two-year, $10 million contract with the Portland Trail Blazers, according to Adrian Wojnarowski of Yahoo! Sports.

Despite averaging more than 10 points per game—the 7-foot center from Michigan, barely received playing time in LA, as both Kaman and former Lakers coach Mike D’Antoni did not see eye to eye last season. The run and gun offense does not maximize Kaman’s capabilities, which definitely led to a lot of frustrations from the big man.

Now with a new team and a new beginning, this upcoming season is going to be crucial, because it may be his last chance to redeem himself from the previous season. At the age of 32, Kaman can still be considered as one of the remaining skilled and solid big men in the league, and the Blazers will look to maximize the most out of the former all-star center.

He better deliver the goods.