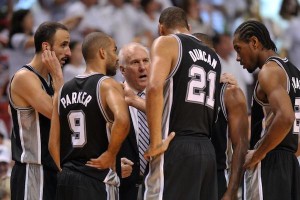 Going out as winners is for losers.

Fourth title of the Big Three era in hand, the San Antonio Spurs could call it quits. Not disband as a franchise literally, but cease to exist as we know them.

Tim Duncan could retire with five rings, his most recent memory that of becoming a champion, the way his mentor David Robinson left. Manu Ginobili could walk away with four rings and do whatever it is he does when he’s not charming us all with that Argentinean accent of his. Coach Gregg Popovich could call a press conference to announce his retirement, his hands decked out in championships rings, from his pinky finger to his thumb, scowling with his shoulders shrunk, his eyes glossed and a complete and utter look of disdain on his face as he adjusts the mic, motions for everyone’s attention and says: “Peace.”

These dynastic Spurs could go out this way. They most definitely could. The team is in good hands with Tony Parker and NBA Finals MVP Kawhi Leonard and Danny Green and Patty Mills and front-office wizard R.C. Buford.

Or they could all come back and fight. Again.

Which is just what they intend to do.

The NBA’s new champions, at the same time they’ve been busy stuffing a fifth title into a run at the top that spans 15 years and counting, have also been huddling and brainstorming in hopes of being ready for every down-the-road eventuality.

Those stubborn Spurs, despite all their recent let’s-wait-and-see proclamations, have been quietly expecting all along for Tim Duncan, Manu Ginobili and Gregg Popovich to stick around next season and return in their current capacities alongside Tony Parker and Kawhi Leonard.

Since the start of the NBA playoffs, I’ve been on countless radio shows—I’m not bragging, I promise—and most of the hosts have asked me some version of the same question: Do you expect this to be it for these Spurs if they win another title?

This year I said no.

Walking away on top would be perfect, yet playing next season seemed to be even better.

Parker, Duncan and Ginobili are all entering the last year of their deals. They’ve made it to the Western Conference Finals in each of the last three seasons. They have one title and were seconds away from a second. Duncan could be playing for his seventh ring next year if Ray Allen didn’t hit that dagger last season.

Why quit now? This thing is clearly still working. And with the leap Mills and Leonard took this postseason, dare we say the Spurs can be even better? Who in the Western Conference, as is, will challenge them, after all?

No one. There isn’t a team that, as constructed, can beat them in the West. Same can be said of the East, unless the Heat add some role players to their superstar core.

These Spurs have plenty of talent and fight and energy left. And they’ll find some way to have unfinished business, some way to justify not completely transitioning into the next era when the timing seemed perfect.

They’ll find a way to make next season, win or lose, the realest, most enjoyable, honest-to-god most perfect last hurrah anyone could have asked for.