J.J. Barea Open To a Return with the Mavericks

admin September 3, 2013 Blogs No Comments on J.J. Barea Open To a Return with the Mavericks 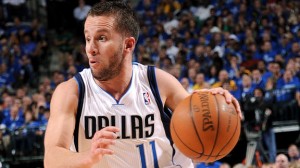 J.J. Barea hasn’t forgotten how much he loved playing for the Dallas Mavericks.

The point guard spent five seasons in Dallas, mostly as a backup, before signing with the Minnesota Timberwolves in the summer of 2011. His departure was and remains unsettling, since it came just after the Mavs beat the Miami Heat in the NBA Finals.

That whole summer is kind of a blur wrapped in a puzzle, really. Mavs owner Mark Cuban allowed a championship roster to dissipate in seconds. Gone was Barea. Gone was Tyson Chandler. Next summer Jason Kidd and Jason Terry followed suit.

And with them went the last of Dallas’ playoff hopes. Dirk Nowitzki went down last season and the Mavs missed the playoffs for the first time in 12 years. Roster fillers such as O.J. Mayo and Chris Kaman weren’t enough to keep the streak alive.

Now a new era, complete with Monta Ellis and Jose Calderon, will be ushered in after they failed for a second straight summer to reel in another superstar. How far have the Mavericks fallen? That’s the question reverberating across the Association. They’re toeing the line between playoff contender and lottery dweller, a boundary they were never supposed to approach. For more than a decade it’s been playoffs, playoffs, playoffs.

But even after everything that’s happened and how different the direction of these Mavericks looks, Barea still has a soft spot for his former team, owner included. According to ESPN Deportes’ Gonzalo Aguirregomezcorta, Barea would welcome a return to Dallas if the opportunity ever presented itself:

“It’s a great relationship with Mark Cuban. If they want to bring me back to Dallas, I am very [good] with it,” he said. “But I’m happy in Minnesota. They’re the ones that wanted me there, the ones that signed me for four years, so until they decide to trade me, I’m going to give them all my effort in the games.”

Not exactly the star-rific endorsement Cuban and co. were hoping for, eh? I’m sure they would have much rather preferred Dwight Howard or Deron Williams welcoming the opportunity to play in Dallas. No offense, J.J.

In all seriousness, it comes as no surprise that Barea would be amenable to a reunion. Things with the Mavs didn’t exactly end on bad terms. Think Jason Terry. Barea took the money and ran. This wasn’t a Chandler situation, where he was traded to the New York Knicks. Or even a Kidd situation, who kind of reneged on a verbal commitment.

This is Barea, who spent his first five years in Dallas. The undrafted guard found a home with the Mavs first. Dallas is where he was able to escape the undrafted stigma. It’s only natural that he’s still fond of the team, the owner and the city.

Don’t go worrying your pretty little heads just yet, though, Minnesota. Barea went on to sing the praises of the Timberwolves, most notably that of Kevin Love and Ricky Rubio.

“If we stay healthy, we see ourselves in the playoffs,” he said.

And if Barea stays humble and becomes more affordable, perhaps the Mavs will give him another look in two years time when he’s a free agent again. Provided they clear up the current backcourt logjam of course.